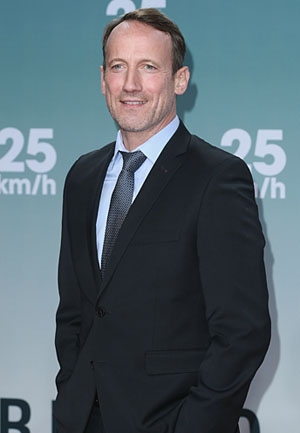 Wotan Wilke Möhring, born in 1967, worked as an electrician and musician, and was a club owner, bouncer, and photo model, before he started his acting career in 1997 in Roland Suso Richter's TV movie "Die Bubi Scholz Story" ("The Bubi Scholz Story"). He then starred in numerous film and TV productions, for instance in 2001 in Kai Wessel's film "Hat er Arbeit?", which won him a nomination for the German TV award), and in Oliver Hirschbiegel's film "Das Experiment" ("The Experiment", 2001).

Möhring won his second nomination for the German TV award for his performance in Mark Schlichter's TV melodrama "Liebe und Verrat" (2002). But Möhring is not restricted to a certain role type. Instead, he starred in films as different as Robert Schwentke's black comedy "Eierdiebe" ("The Family Jewels", 2003), Christian Alvart's thriller about a serial killer, "Antikörper" ("Antibodies", 2005) and Jan Bonny's drama "Gegenüber" ("Counterparts", 2007).

In 2008, Möhring appeared in three theatrical releases and five television productions. In addition to roles as supporting actor in "Operation Walküre" ("Valkyrie") next to Tom Cruise, and in the British-German co-production "Pandorum", featuring Dennis Squad and Ben Foster, he had two memorable appearances in German cinema in 2009: in the ensemble comedy "Männerherzen" ("Men in the City") where he played a choleric, yet loving husband who tries to get his wife back, and in Fatih Akin's "Soul Kitchen", as a sleazy estate agent. A total turn was his role in the psycho thriller "Das letzte Schweigen" ("The Silence", 2010), where he brilliantly performed a respected architect, who killed a girl years ago and now gets haunted by his dark past.

2011 again was a very productive year for Möhring: he appeared in eight movies, i.e. the television production "Der Brand", where he played a rapist, the sequel "Männerherzen...und die ganz ganz große Liebe" , where he returned to his role as a morbidly jealous husband, and in the TV-drama "Der letzte schöne Tag", that tells the story of a father, who, together with his children, has to deal with the suicide of their mother. His stunning performance earned him the German Film Award.

In the comedy "Mann tut was Mann kann" ("Men Do What They Can", 2012) by Marc Rothemund, he played a more cheerful role: as womanizer and confirmed bachelor, he has to deal with sudden feelings of love and the relationship problems of his best friends.

Similar to "Der letzte schöne Tag" was the point of departure for Möhring's character in André Erkau's "Das Leben ist nichts für Feiglinge" ("Life Is Not For Cowards"), which had his premiere at the Hamburg Film Festival and opened in cinemas November 2012: Möhring again portrays a family father, whose life is about to fall apart after his wife's sudden death.

After roles in the modern Christmas story "Obendrüber, da schneit es" (2012, TV) and the miniseries "Das Adlon. Eine Familiensaga" (2012), Möhring made his final appearance as police detective Benjamin Lutz in the show "Stralsund". Instead, he took on the role of police detective Thorsten Falke for the new Hamburg edition of the "Tatort" TV series.

In 2014, he starred in the thriller "Who Am I - Kein System ist sicher", the coming-of-age story "Besser als nix" and the comedy "Alles ist Liebe". He next reprised his role as womanizer Paul for "Da muss Mann durch", the sequel to "Mann tut was Mann kann". He embodied another rather offbeat character in "Kleine Ziege, sturer Bock" ("Stroppy Cow, Stubborn Ram", 2015), which saw him playing an Elvis impersonator who unexpectedly has to take care of his until-then unknown daughter.

2016 was another busy year for Woltan Wilke Möhring, who starred in the black comedy "Sex & Crime", the body switch comedy "Seitenwechsel", the drama "Was im Leben zählt" and the TV remake of the German Western classic "Winnetou". The following year, he reprised his role from the reefer comedy "Lammbock" for the sequel "Lommbock" and also starred as an aging punk rocker in "Happy Burnout". Moreover, he played a hostage in the TV thriller "Am Ruder" and began shooting the action movie "Steig. Nicht. Aus!", directed by Christian Alvart.

In the TV series "Parfum" (2018) Möhring portrayed a prosecutor who has to solve a murder series inspired by Patrick Süskind's novel "The Perfume". Playing a horse owner, he belonged to the ensemble of the children's film "Immenhof - Das Abenteuer eines Sommers" ("Immenhof - The Adventure of a Summer", 2019); in the comedy "Das perfekte Geheimnis" he was a vain plastic surgeon.

Möhring had a leading TV role in the multi-parter "West of Liberty" (SE/DE 2019), as a former Stasi informer and CIA double agent who is tasked with protecting an American whistleblower in Berlin. In addition to these numerous cinema and television roles, Wotan Wilke Möhring has been playing a commissioner in the investigative team of the NDR "Tatort" episodes.