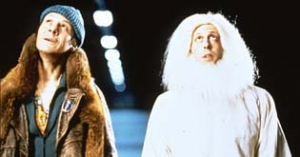 New Year′s Eve 2000. Jonathan′s exhausting 1000-year term as a demi-god is finally over. The blissful paradise of the gods awaits! Actually, things aren′t quite so cool;

in fact Jonathan is scared shitless because in a couple of hours he′s got to report to Divine Central, where his boss, the Over-Goddess Yolanda, will grill him on his final report. Then he′ll be screwed, because she′ll quickly realize what a mess this lazy, always-wasted demi-god has left behind. Even worse, Jonathan completely spaced out finding himself a replacement, which could mean his having to endure 10 more centuries of this lowly, partial-god crap. He winds up choosing Niklas, of all people, whose only relationship to eternity is with the undying love he′s recently been hung up with. Facing the ultimate drag of yet another thousand wasted years, Jonathan gathers all of his remaining wits to execute his plan. It′s going down on New Year′s Eve, a night that Niklas will remember for a very, very long time.