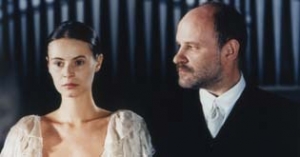 "Lea" - a modern fairytale for adults - tells the story of an unusual and, in the end, tragic relationship between a traumatised girl from Slovakia and a former Foreign Legionnaire from Germany. Herbert Strehlow, a furniture restorer living on his own, comes to Slovakia in 1991 to sort out some property affairs.

Whilst there, he meets Lea who has not spoken since childhood. Strehlow falls in love with her because she looks amazingly like his late wife and buys her from her step-parents. He takes her away against her will with him to Germany and marries her. A relationship that is apparently doomed to failure. Gradually, each of them penetrates further and further into the mysterious sphere of the other one and senses that they are bound together by a kind of spiritual affinity.