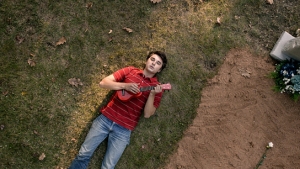 The story of Mike Tyson. Not the boxer, a different one. It is not easy being a teenager and Mike, 16-years-old, is having the very worst of times. He lives with his mother Cynthia, a notorious nagger, in Faintville, a town based around the timber industry, set in its days and ways, deep in the Canadian forests. He has no father, no friends, not even a favorite food. Basically, his sole wish is to vanish from the face of the earth.

One day, Mike decides to put an end to the cynical joke that fate has played on him, or life as it is called in other words: he places his own obituary and shoots himself! To his greatest disappointment he wakes up the next day not in heaven but at the local hospital. And suddenly Mike's fate takes a very dif­ferent turn when, during a routine examina­tion, the doctors discover a plum-sized tumor in his head. Mike can scarcely believe his luck and keeps the illness to himself so as to avoid undergoing the operation that would save him. Staring death directly in the eyes, how­ever, changes Mike's view of life. For example, it causes him to re-evaluate his opinion of the crazy and enchanting Miranda, the first human being who appears to understand him. And slowly but surely, Mike develops a completely new wish.