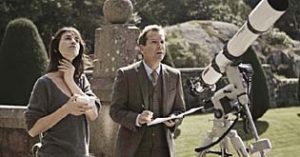 A glittering party in the province: Young Justine and her great love Michael celebrate their wedding on the country estate of Justine's sister Claire and her husband John. The atmosphere is exuberant, but in the course of the night Justine regains her melancholy and despair, and the celebration is heading for disaster.

Some time later, a huge planet called Melancholia approaches Earth. A collision, considered inevitable by some scientists and absurd by others, would wipe out all human life. As John appeases, Claire continues to heighten her fear of death. But Justine, who has been in deep depression for the past few months, seems to be gaining peace and strength from the possible end of the world.