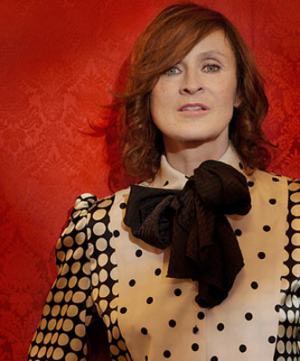 Sophie Rois was born June 1, 1961 in Ottensheim near Linz and attended actor's training at Vienna's Max-Reinhardt-Seminar from 1983 to 1986. In 1986, she went to Berlin and worked for Renaissance Theater and Freie Volksbühne.

Rois is an ensemble member of Volksbühne since 1993. In the 1990s, she appeared in three films by Detlev Buck, "Hopnick" (1990), "Wir können auch anders" ("No More Mr. Nice Guy", 1993), which won her the Bundesfilmpreis for "Best Actress in a Supporting Role", and "Liebe deine nächste!" ("Love Your Female Neighbour", 1998). Furthermore, Rois played a prostitute in the TV movie "Doktor Knock" (1996) by Dominik Graf, an heiress in "Die Siebtelbauern" ("The Inheritors", 1998) by Stefan Ruzowitzky, a female sniper in the international co-production "Duell - Enemy at the Gates" (2001), and Erika Mann in the TV mini series "Die Manns" (2001), which won her and the ensemble an Adolf Grimme Award as well as a Bavarian TV Award.

After parts in "Liegen lernen" ("Learning to Lie", 2003) and "Sergeant Pepper" (2004), Sophie Rois won her next German Film Award for her supporting role in "Der Architekt" ("The Architect", 2008), directed by Ina Weisse, followed by several prestigious TV-movies. Her part in Tom Tykwer's story of a love triangle "Drei" ("Three", 2010) alongside Sebastian Schipper and Devid Striesow won her the third German Film Award, this time in a leading role. She also received the Bavarian Film Award und the German Film Critics Award for her performance.

Rois then had leading roles in the award-winning "180° - Wenn deine Welt plötzlich Kopf steht" (CH 2010) and in "Zum Geburtstag" ("A Pact", DE/FR 2013). She also frequently guest-starred on popular TV shows like "Tatort" and "Polizeiruf 110" and lend her prolific voice to numerous audio books and radio plays. In 2016, she was one of the adult leads in Ralf Huettner's adaptation of the children's book series "Burg Schreckenstein". She revisited the role in the film's sequel "Burg Schreckenstein 2 - Küssen (nicht) verboten" ("Shiverstone Castle 2", 2017).

For her portrayal of a psychotherapist in Lars Becker's comedy "Der mit dem Schlag" (2016) Rois was nominated for the German Actor Award. She appeared in supporting roles in the relationship drama "Was uns nicht umbringt" ("What Doesn't Kill Us", 2018) and the tragicomedy "Glück ist was für Weicheier" ("Happiness Sucks", 2018). David Schalko cast her in his highly acclaimed series "M - Eine Stadt sucht einen Mörder" (2019) as the leader of the underworld, a role played in Fritz Lang's original by Gustaf Gründgens. Rois starred as head of an academic institute which is plagued by financial difficulties in Max Linz's university farce "Weitermachen Sanssouci" ("Music and Apocalypse", 2019). She also belonged to the ensemble of Terrence Malick's "A Hidden Life" (US/DE 2019).

In the same year, she was part of the ensemble of Ina Weisse's "Das Vorspiel" ("The Audition") in a supporting role.

After that, Rois was seen in a number of TV and streaming productions, for example as a seer in the series "Barbaren" (2020) and as a school principal in the family comedy "Eltern mit Hindernissen" alongside Nicolette Krebitz.

In 2021, Krebitz then cast Rois in the lead role of her feature film "A E I O U - Das schnelle Alphabet der Liebe" ("A E I O U - A Quick Alphabet of Love", DE/FR 2022), about a 60-year-old actress who develops a special relationship with a 17-year-old outsider and thief (Milan Herms). The film premiered in competition at the Berlinale in February 2022.

Rois from time to time stars as singer of the Band "Straight from the Heart".