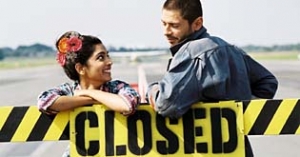 Millions of people pass through the Frankfurt Airport on their way from one city to another; for Alexej and Nisha, however, the airport is a city in itself - their own. With the help of airport technician Dak, Alexej breaks out of the holding area for refugees. Dak puts up the Russian, who yearns to become a pilot, in an underground labyrinth of pipes and vents. The young Indian woman Nisha pictures herself as a flight attendant, but the only time she ever boards a plane is to clean it… The two meet one night inside an empty jet as they are both acting out their dreams. Enraptured, the passionate Alexej offers her his love - and wins her heart. When Alexej finds out that Nisha′s dream is fueled by the desire to bring her little son to Germany, he hands Dak his own savings, along with Nisha′s, to have the boy smuggled out of India. Their plan runs smoothly until the plane lands in Frankfurt and the boy, mistaken for another child, is put in detention. Alexej promises Nisha to rescue her son - and to do so, he makes his own dream of flying come true…

Shot in English and based on a script by Gordan Mihic ("Black Cat, White Cat"), award-winning director Veit Helmer ("Tuvalu") has created a tender and uplifting tale of love and longing with a mesmerizing cast of actors from ten countries. As Nisha, celebrated young Indian superstar Masumi Makhija brings a vibrant warmth to her role.