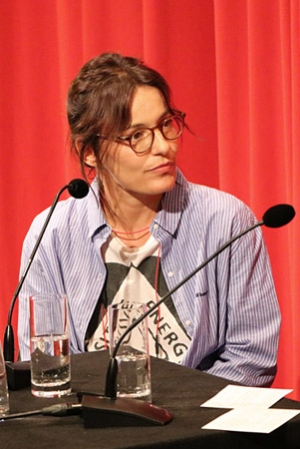 Nicolette Krebitz at the Deutsches Filmmuseum on September 6, 2016

Nicolette Krebitz, born September 2, 1972, in Berlin, started her acting career at the age of eleven with a leading role in the TV movie "Ich wette, es wird ein Junge". Later she became the host of "Disney-Club" and attended actor's training at the Fritz Kirchhoff drama school. In 1995, Krebitz won the Grimme award for her part as an AIDS victim in Markus Imboden's film "Ausgerechnet Zoé". Krebitz also appeared in several unconventional parts in niche films such as "Long Hello and Short Goodbye" (1998), "Fandango" ("Fandango - Members Only ", 2000), and "Die Männer ihrer Majestät" ("All the Queen's Men", 2001). In 2001, Krebitz made her directing debut with "Jeans". Furthermore, she won a Goldene Schallplatte for her soundtrack to the film "Bandits" and sang with the club music band Terranova. Also, Hamburg-based rock band Tocotronic paid homage to her in their song "Nicolette Krebitz wartet".

Since directing her first film, Krebitz only sporadically appeared as an actress on the movie screen. Instead, she was occasionally seen in TV crime series such as "Tatort" or "Spezialisten: Kripo Rhein-Main". In 2007, Krebitz returned to the big screen with her second film as a director, the star-studded surreal drama "Das Herz ist ein dunkler Wald" ("The Heart is a Dark Forest") but did not play a part herself.

In 2009, Krebitz returned to the movie screen in an acting role: In Anne Hoegh Krohn's love story "Liebeslied", she plays a woman whose partner falls ill with Parkinson disease. After "Liebeslied", Krebitz played another leading role in Christoph Hochhäusler's film "Unter dir die Stadt" ("The City Below", 2010), a film about a bank manager who exploits his power and influence to get his lover's husband out of the way.

She had a supporting role as the widowed mother of a rebellious teenager in "Lollipop Monster", played a woman who wants to avenge the death of her romantic partner in the experimental thriller "90 Minuten - Das Berlin Projekt" (The Berlin Project") and starred as a wealthy widow who is courted by a con man in the made-for-TV comedy "Der Heiratsschwindler und seine Frau".

"Draußen ist Sommer", which stars Krebitz as a depressed woman who wants to start over with her family in Switzerland, premiered at the 2012 IFF San Sebastián and was released in October 2013. She next was seen in the thriller "Der blinde Fleck" ("The Blind Spot"), playing the wife of a journalist who investigates the terror attack at the 1980 Oktoberfest in Munich.

After dramatic parts in the TV productions "Die Flut ist pünktlich" (2014) and "Blutsschwestern" 2014 (aired in Germany with the title "Die Tote in der Berghütte"), Krebitz displayed her comic talent in "Besser als nix" (2014). Starring opposite Katja Riemann and Sophie von Kessel, she next played a rock musician who plans her comeback in the TV film "Frauen" (2015).

In early 2016, Nicolette Krebitz premiered her highly anticipated third feature film as writer-director at the renowned Sundance Film Festival: "Wild" depicts how a young introverted woman discovers her anarchic and animalistic side after encountering a real-life wolf. The thought-provoking film garnered positive reviews and was released in Germany in April 2016.