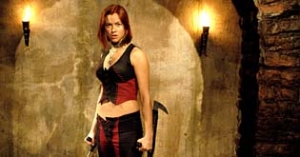 Movie adaptation of the video game by the same name that tells the story of vampire huntress Rayne who herself is half human, half vampire. The film tells Rayne′s back story that already began in 1723. After her father, the vampire king Kagan, rapes and kills Rayne′s mother, the young woman vows vengeance. Together with two vampire hunters, she starts to search for her father.