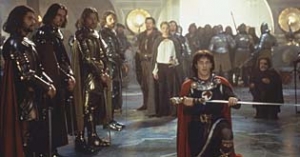 Valiant is squire at Camelot, the court of King Arthur. Little does he know that he is the rightful heir to the throne of Thule. The Vikings are ruling there under the equally cruel and decadent brothers Sligon and Thagnar.

With the help of the witch Morgan Le Fey - King Arthur′s rejected sister - they have stolen Excalibur and are threatening to use it to deprive Camelot of its power. After many action-packed adventures with knights, giants and dwarfs fighting for the magical sword Valiant wins the love of the beautiful and wild princess and learns of his true origins.