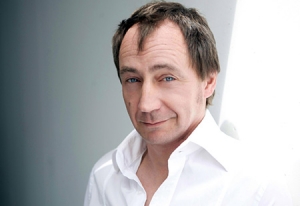 Thorsten Merten was born in Ruhla near Eisenach in 1963. He originally wanted to become a journalist, but his plan was denied by GDR authorities, because he gave a satirical performance at a local cabaret. Merten then decided to study acting at the Berlin Hochschule für Schauspielkunst "Ernst Busch" and graduated with a diploma in 1990. After his graduation, he got engagements at various stages throughout Europe, including Ruhrfestspiele Recklinghausen and the Théâtre Vidy Lausanne. He became an ensemble member at the Staatstheater Schwerin from 1992 to 1994 (and from 1999 to 2003).

Merten made his film debut in Andreas Dresen's award-winning film "Stilles Land" (1992), a drama about the German reunification. A minor part in Joseph Orr's comedy "Oben-Unten" (1994) was his last appearance in a film until 2001. He focused on his stage career instead and received the Conrad-Ekhof-Award in 1999.

He made a successful comeback on the big screen with the award-winning film "Halbe Treppe" ("Grill Point", 2001/02) for which he received an award for "Best Actor in a Leading Role" at the Festival du Cinéma Européen in Paris. In the following years, Merten had minor parts in several films, including Dito Tsintsadze's "Schussangst" ("Gun-Shy", 2003), Eoin Moore's "Im Schwitzkasten" ("No Sweat", 2005), Aelrun Goette's "Unter dem Eis" ("Under the Ice", 2005), Oskar Roehler's "Elementarteilchen" ("The Elementary Particles", 2006) and Maximilian Erlenwein's "Schwerkraft" ("Gravity", 2009). In "Vier Fenster" ("Four Windows", 2006, director: Christian Moris Müller), Merten had a starring role as an unemployed father.

In 2004, he got engagements at the Maxim-Gorki-Theatre in Berlin where he mostly worked with Volker Hesse. Since 2008, Merten is an ensemble member at the Volksbühne Berlin where he appeared in Dimiter Gotscheff's production of "Iwanow" (2008) and Aischylos's "Prometheus" (2009), and also in "Hunde" ("Dogs", 2008) und "Nord" ("North", 2009) which are based on novels by Louis-Ferdinand Céline.

Apart from working for film and theatre productions, Merten appeared in popular German crime series, including the "Tatort" episode "Die fette Hoppe" where he played alongside Christian Ulmen and Nora Tschirner. He is also well-known for his role as chief inspector Fichte in the "Spreewald-Krimi" installments.

In 2014, he returned to the stage at Staatstheater Schwerin with an engagement in "Sonnenallee – Das Musical", based on the film by Thomas Brussig, Detlev Buck and Leander Haußmann. Merten gave his latest performance on screen in Michael Baumann's "Willkommen bei Habib" ("Habib Rhapsody"), which premiered at the Hofer Filmtage in 2013.