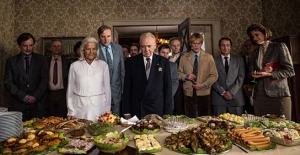 In Times of Fading Light

East Berlin in the early autumn of 1989. Wilhelm Powileit is grinning and bearing his 90th birthday with stoic indifference. There’s not much the old man hasn’t seen. A staunch communist for the past 75 years, he fled from Nazi Germany and lived in exile in Mexico. Meanwhile his stepson Kurt was arrested in Moscow as an alleged counter-revolutionary. After his return to East Germany, Wilhelm had only limited possibilities of a party career in the SED due to being an ‘émigré from the West’. But today the Young Pioneers are serenading him and he is being decorated with medals.

Whilst Wilhelm vehemently denies that his ideal of a better world was nothing but a fantasy and that the high hopes of yesteryear have been smothered by bureaucracy and fear, the younger generation is leaving the country. And cracks have appeared in his own family that are also beyond repair ... Screenwriter Wolfgang Kohlhaase, who last took part in the Berlinale Competition with "Als wir träumten" ("As we were dreaming") turns Eugen Ruge’s best-selling novel into a study of lost dreams. A cinematic portrait of society which uses the story of a disintegrating family to retrace the course of the twentieth century.