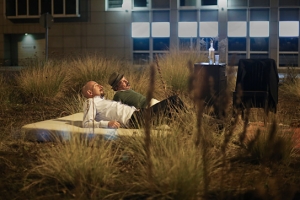 Habib has always tried to feel at home in Germany. When he unexpectedly runs into his childhood love from a Turkish village decades later, his life is thrown out of kilter. His son Neco hates his father for having become "too German" and dreams of a Turkey he doesn’t even know. Torn between his wife, his small son and his lover, Neco is in danger of getting caught up in dangerous Mafia-life scams.

Bruno is a successful building contractor until one day he is fired from his own company on suspected embezzlement. On a traffic island right in front of Habib’s kebab shop he holds a sit-in in an attempt to avenge the wrongdoings against him. And time and time again, an old man shuffles across the littered square in front of the kebab shop. It’s Ingo looking for the right connection. He wants to talk to his daughter one last time and ask for her forgiveness.

The fates of four men collide and intertwine in four mild summer nights. Old wounds are torn open, new wounds are inflicted and surprising encounters take place. And when the sun rises over the metropolis and the garbage collectors finally start working again and reinstall "German order" after their strike, things have changed for good for the four men.