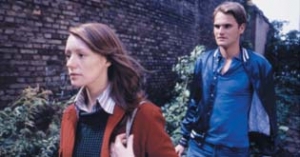 "Gun-Shy" is a poetic thriller, depicting the desolation and disintegration of Lukas, a misfit. His life takes a strange turn for the worse when he becomes involved in an unrequited love affair with Isabella. Lukas is doing civil service, delivering "meals on wheels" to the old and sick. He has no friends and is surrounded by an eclectic mixture of lonely and eccentric neighbors. He spends most of his time alone. At night he rows on the river which runs through the town, sometimes meeting a diver who plays dead man in the water.

Then Lukas′ life takes on a whole new dimension when he meets Isabella, the melancholy but fascinating girl of his dreams. He falls madly in love with her and very soon his only goal is to protect and look after her. Isabella is everything Lukas could wish for: she is exciting and ethereal, beautiful and sad, but she is also involved in an ambivalent relationship with her step-father. He works as a motivation and success trainer, teaching people how to conquer their fears, while keeping up the happy family pretence. Pressure mounts further in Lukas′ world as he is investigated by a police officer who has him under suspicion after a theft at the boat house.

A seed has been planted in Lukas′ mind and a plan develops almost of its own accord. In order to do what he feels he has to do, Lukas, the pacifist who refused to join the army, buys a rifle. Suddenly the object of his aggression and hate is eliminated and there is no reason for Lukas to have a problem anymore. But Lukas is not the person he used to be. When Isabella starts to distance herself from him, he becomes more and more confused and chaotic. He cannot reach Isabella. He doesn′t know how to deal with it all. His world begins to crumble around him.