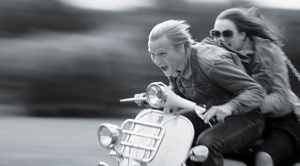 Martin and Ruby have burned their bridges. They are on the run. Ruby’s father is an irredeemable tyrant, strictly Catholic, stamped by his wartime experiences and the prevalent morality of the post-war period of reconstruction. Ruby, for obvious reasons, does not dare reveal her love for Martin. For her father he, Martin, embodies everything that he wants to keep away from his daughter. Martin is rebellious, long-haired and has "dumb ideas" in his head. Martin loves Rimbaud and dreams of being an author, an author whose literary works will move and change the world. Ruby is passionately into music. She is taken especially with Grace Slick from Jefferson Airplane. Anybody who has heard Ruby sing, just once even, knows she has nothing to fear from comparison with her idol. She and Martin meet secretly as often as they can, but every passing day makes their situation only more intolerable.

The noose around their necks starts slowly to tighten. They make a run for it but the dream is short. Ruby lands in a closed Catholic home run by the Sisters of Mercy, about whom there is very little that is merciful. Martin is sent to the notorious religious educational institute in Freistatt. Separated from one another, they now have to fight for their mental survival – in a world designed to break them.

The year is 1977. Ruby looks back over the previous decade and draws a bitter balance. She now earns her living singing anodyne pop songs about a "perfect world". But this evening in Baden, near Vienna, just before she is due to take the stage, she is visited by the ghosts of the past.