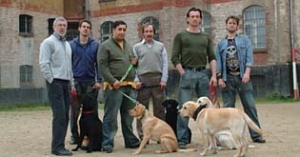 Muscular prison inmate Mosk has only one end in mind during his imprisonment: He wants to win the intra-prison weightlifting championship. Thus, he is not interested in the new and innovative reintegration program that the new warden wants to try out: The inmates are supposed to train puppies to become guide dogs for the blind. But Mosk has no choice – he gets selected for the program and has to share his prison cell with a cute little puppy. Still, the tough guy tries to avoid the project by completely refusing to cooperate. But that only makes Mosk′s fellow inmates angry who have already taken their little charges into their hearts.