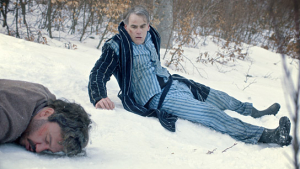 Although he already has searched Iraq unsuccessfully for weapons of mass destruction as a member of a UN mission, German bio-weapons expert Arndt Wolf is still obsessed with the idea that Saddam Hussein is hiding something. Nobody around him is interested in this topic any more. This changes abruptly when an Iraqi asylum seeker claims to have been involved in the manufacture of biological weapons. The German Federal Intelligence Service summons Dr. Wolf to ascertain the legitimacy of the claims made by the informant, who has been given the code name "Curveball". Meanwhile, the 9/11 attacks have shaken the world and put Americans on edge... Johannes Naber shrewdly observes the burgeoning friendship between two unlikely men who find themselves engulfed by the absurd drama they have set in motion. Moreover, as we are warned from the outset, this is – unfortunately – a true story. Naber’s outrage is contagious. Even those previously aware of the facts cannot be anything but dumbstruck as the surreal sequence of events unfold that were to lead to the 2003 Iraq invasion.