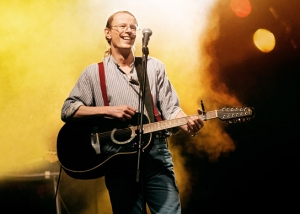 Biopic about East-German singer-songwriter Gerhard Gundermann (1955–1998). During the day, he worked as a digger operator in a coal mine. Yet after his shift, he successfully performed as a singer who reached the masses. In his songs, he pondered existential questions of life and death, but also didn't shy away from addressing current political and social issues. His very personal lyrics and authentic performances made him a cultural icon in the German Democratic Republic of the Eighties. At the same time, he frequently got into trouble with the authorities. After the fall of the wall, Gundermann's popularity not only remained, it even grew bigger. Even when it was revealed in 1995 that Gundermann used to be an informant for the notorious secret state police Stasi, the news didn't really tarnish his success – and though his musical career garnered him a good income, he continued to work as a digger operator. In 1998, Gerhard Gundermann passed away after suffering from a brain seizure.