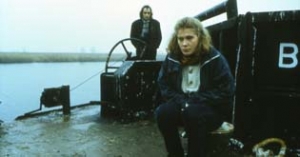 Andreas Dresen′s debut film is set in the eventful days of the fall of 1989. Although the political landscape is in turmoil, the situation in the rural parts of the GDR is still rather quiet. The same applies to a small town theatre where young director Kai is staging his first production, "Waiting for Godot", of all things. But his enthusiasm is undermined by the cautious constraint and apathy of his cast. More and more, Kai relates the play’s imagery to the current political situation while, in the meantime, one member of the ensemble has fled to the Hungarian embassy. Slowly, the rest of the cast overcomes its apathy and together, they write a petition addressed to Honecker. But when the wall finally collapses, a trip the ensemble had planned together gets cancelled because of minor reasons. It is just Claudia, the assistant Kai has fallen in love with, who makes the trip on her own although against Kai′s accord. She later returns with an actor from Hamburg who – just as the caricature of a cliché West German – tries to improve the situation of the theatre with some marketing tips.