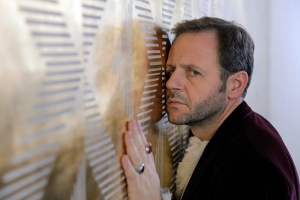 Samuel Finzi, born 1966 in Plovdiv, Bulgaria, attended actor’s training at the national theatre and film academy in Sofia and has appeared as a film and theatre actor in Germany since the beginning of the 1990s. In Bulgaria, Finzi, who is living in Berlin now, was most often seen as a leading actor in movies. Although most of these movies have been successful at international festivals, they are hardly known in Germany, where Finzi was first mainly seen, either on TV or on the movie screen, in smaller parts in films such as Jan Schütte's "Abschied – Brechts letzter Sommer" ("The Farewell") or Oliver Hirschbiegel's "Ein ganz gewöhnlicher Jude" ("Just an Ordinary Jew"). But German theatre goers had already witnessed Finzi's versatility as an actor. Since 1994, Finzi has performed in leading roles at Schauspielhaus Düsseldorf, Thalia Theater Hamburg, Volksbühne Berlin, or Deutsches Theater Berlin, to name but a few.

In 2011 Finzi had memorable roles in the box-office hits "Kokowääh" (he also returned for the 2013 sequel) and "Männerherzen … und die ganz ganz große Liebe" ("Men in the City 2"). From 2009 until 2012, he also starred as police psychologist Flemming in the eponymous TV series.

After receiving favorable reviews for his portrayal of a Soviet Army lieutenant in the biopic "George" (2013), Finzi appeared in Lola Randl's tragicomedy "Die Erfindung der Liebe" ("The Invention of Love", 2013) and had a supporting role in the Bulgarian TV series "The Fourth Estate" (2013).

In 2014, Finzi starred in the low-budget comedy "Worst Case Scenario" and had supporting roles in "Fünf Freunde 4" and Oskar Roehler's "Tod den Hippies!! Es lebe der Punk" ("Punk Berlin 1982"). In 2015, he starred in supporting roles in the satire "Outside the Box" as well as in the comedies "Halbe Brüder" ("Half Brothers") and "Macho Man".

Director Gordian Maugg cast him for "Fritz Lang" (2016) as serial killer Peter Kürten from Düsseldorf and in the biopic "Marie Curie" (2016) he starred as French journalist and dramatist Gustave Téry. In 2016/2017, Finzi appeared in three episodes of the crime series "Allmen" as the main character’s butler. On the big screen he was part of the ensemble of the action comedy "Hot Dog" (2017) that included Til Schweiger, Matthias Schweighöfer and Heino Ferch. After that, he played a lead role in Oskar Roehler’s satire film "HERRliche Zeiten" ("Subs", 2018).

The comedy "Meine teuflisch gute Freundin" ("How to Be Really Bad", 2018) shows him as the devil in person (and father of the title character); he had a leading role alongside Til Schweiger and Milan Peschel in the comedy "Klassentreffen 1.0" ("Class Reunion", 2018), about three friends who want to make a big splash at their 20-year high school graduation. The film was a huge box office success, and together the trio also appeared in front of the camera for the sequel "Die Hochzeit" (2019). Finzi also had supporting roles in two Bulgarian cinema productions: the historical war drama "Once There Was a War" (2019) and the road movie "18% Grey" (2020)