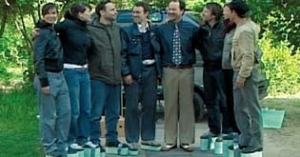 Measures to Better the World

An episodic film designed to gently flex our utopian muscles. A lovingly critical satire that shows what happens when Germans try to change the world. For in this film, the most peculiar and even perverse ideas are given a shot at being implemented. Naturally, not everything has to be taken deadly seriously. These world-improving measures include:

The brother-on-loan scheme: German couples’ trepidation when it comes to procreation is a well-known phenomenon and the number of families with just one child is on the increase. Unemployed people such as Martin can provide a solution to this. But being Jonas’ little brother is not as easy as you might think.

The traffic light society: “We want all cars to pull away from traffic lights at the same time,” is how Rolf puts his mission. “It would end all traffic jams!” Rolf is determined to convince the German automobile association of the usefulness of his idea.

Slomoman: At one time he was Krefeld’s fastest bongo player. Now, whenever Simon pays a visit to Silke, he takes so long to remove his jacket that this infuriated ex-band member tears it off his back. Simon says: “Ever since I’ve been moving slowly I’ve been able to get on with things much quicker than before.”

Sack your office: A crisis. And no light at the end of the tunnel. The boss has to do something. And so, from now on, everyone’s working outside on the pavement.

At night. Eye-level: Holger just can’t stand the misery of all the injustice and inequality in the world any longer. Suddenly, he has the solution: make everyone the same height.

Radibor’s monetary miracle: Radibor is a tiny town in Saxony where the Sorbs, a small minority of Slav descent, are trying their best not to die out. Like so many places in east Germany, Radibor is in the economic doldrums. But then, Peter Novak comes along with a brilliant idea: money with a sellby date. This new currency will be called the “Sorb euro”.