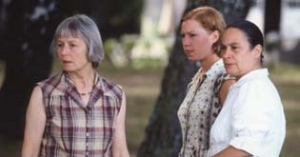 It is one of the last days of an exceptionally hot summer. Bertolt Brecht is about to leave his lakeside house among the tall birches in Brandenburg to return to Berlin for the upcoming theater season.

Most of the women of his life are there: his wife Helene Weigel, daughter Barbara, the old lover Ruth Berlau, his latest flame, the nubile actress Kaethe Reichel and sensous Isot Kilian, whose affections and body he shares with the rebel political activist Wolfgang Harich. They swim, write, eat, drink and philosophize about art, politics, the basic tents of life - and throughout, the Stasi is there - lurking on the sidelines - waiting.

The serenity of the country on this summer day of 1956 stands in marked contrast to the deep, volatile emotions of the characters. Brecht is at the center of the storm in the heaven and hell of human relationships: love and hatred, jealousy and egomania, betrayal and dashed hopes. He struggles to make plans for a future that fate was soon to end.