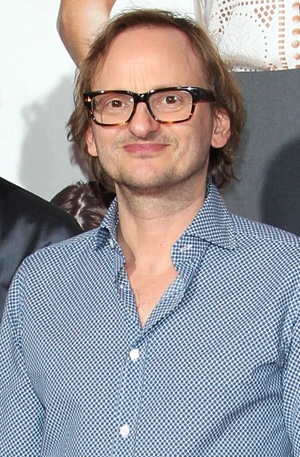 Milan Peschel at the premiere of "Irre sind männlich" in Munich on April 10, 2014

Milan Peschel was born in Berlin in 1968. From 1984 to 1986, he trained to become a carpenter for the theatre at Berlin's Deutsche Staatsoper and worked as a stage hand at Volksbühne Berlin till 1991. Peschel then took actor's training at Berlin's Hochschule für Schauspielkunst Ernst Busch from 1991 to 1995 which was followed by engagements at the Hans-Otto-Theater in Potsdam and at Neue Bühne Senftenberg. Since 1997, he was a cast member of Frank Castorf's Volksbühne on Rosa-Luxemburg-Platz in Berlin but was also seen as a guest in several theatre productions in Germany and Austria, for example at Hamburg's Thalia Theater or at Salzburger Festspiele.

Besides his work for the theatre, Milan Peschel also played in several TV and movie productions. He starred in successful TV productions such as Jo Baier's "Stauffenberg" ("Operation Valkyrie", 2003) or Hendrik Handloegten's "Pechmarie" (2005), a "Tatort" series film, but also played the leading part in movies such as "Lenz" (2004) and "Netto" (2005) by Robert Thalheim. In 2006, Peschel won the German film prize as "Best actor" for his performance as a workless father in "Netto".

In Sebastian Schipper's melancholic relationship drama "Mitte Ende August" ("Sometime in August", 2009), Peschel proved that he is also able to play entirely different characters. In the film that is loosely based on Goethe's novel "Wahlverwandschaften", he played a young man in a happy relationship. But then, he is thrown out of balance when his brother and a friend show up unexpectedly.

Peschel continued to appear in highly different, yet always ambitious cinema releases, including Sven Taddicken's history romp "12 Meter ohne Kopf" ("12 Paces Without a Head"), Matti Geschonneck's  "Boxhagener Platz" ("Berlin, Boxhagener Platz") and Oskar Roehler's controversial "Jud Süss - Film ohne Gewissen" ("Jew Suss - Rise and Fall"), in which he embodied actor Werner Krauss. After supporting roles in the sports drama "Der ganz große Traum" ("Lessons of a Dream") and the hit comedy "What a Man", Peschel was praised by audiences and critics alike for his lead performance in Andreas Dresen's 2011 drama "Halt auf freier Strecke" ("Stopped on Track"). In the film, Peschel plays a family man who is diagnosed with an incurable brain tumour.

In 2012, Peschel portrayed a ruthless slave trader in Hermine Huntgeburth's "Die Abenteuer des Huck Finn" ("The Adventures of Huck Finn", 2012) and a lovesick loser in Matthias Schweighöfer's box office hit "Schlussmacher" ("Break Up Man"). Following cameos in Peter Thorwarth's "Nicht mein Tag" ("Not My Day", 2013) and Schweighöfer's "Vaterfreuden" ("Joy of Fatherhood"), he starred in Anno Saul's comedy "Irre sind männlich". In the ambitious historical tragicomedy "Bornholmer Straße" (TV, 2014) which deals with the last hours before the Berlin Wall came down in 1989, he starred as a GDR first lieutenant and party official.

In the more easy-going children's movies "Rico, Oskar und die Tieferschatten" ("The Pasta Detectives", 2014) and "Rico, Oskar und das Herzgebreche" ("The Pasta Detectives 2", 2015) he featured as the young heroes' uncanny neighbour, before playing an awkward babysitter of two spoiled brats in "Der Nanny" (2015). Milan Peschel was then cast for Wolfgang Becker's adaptation of the best selling novel "Ich und Kaminski" ("Me & Kaminski", 2015) where he had the memorable part of an art magazine's chief editor.

The year 2016 also went quite well for Peschel: Among other projects, he featured in Johannes Naber's fairytale adaptation "Das kalte Herz" ("Heart of Stone") as the mysterious Glasmännlein, in "Rico, Oskar und der Diebstahlstein" ("The Pasta Detectives 3") again as Fitzke, the neighbor, and in Philipp Stölzl's made-for-TV version of "Winnetou" as the quirky Sam Hawkens.

In addition to his screen career, he continued to star in stage productions, for instance at the Deutsche Theater and the Volksbühne in Berlin. He himself directed productions of "Tartuffe" in Copenhagen (2016), "Pünktchen und Anton" in Berlin (2017) and "Mephisto" in Hannover (2018).

The children's film "TKKG" (2019) showed him as a dubious clairvoyant, the children's film "Mein Lotta-Leben - Alles Bingo mit Flamingo!" ("My Life as Lotta", 2019) showed him as a self-appointed guru. In "Querschläger" (2019), an episode of crime series"Tatort", Peschel had a leading role as a customs officer, who becomes blackmailer. For the stage, he directed "Arsenic and Old Lace" (2018) at the Heidelberg Theatre and "Die Letzten" (2019) at the Magdeburg Theatre.

Milan Peschel is living in Berlin.