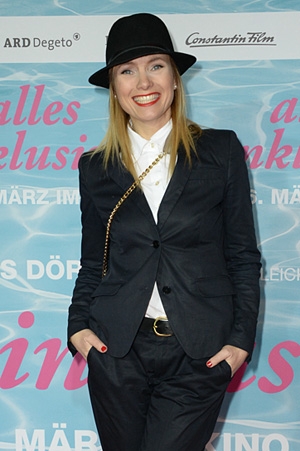 Nadja Uhl at the world premiere of "alles inklusive" in Munich, February 24, 2014

Nadja Uhl, born May 23, 1972, in Stralsund, studied acting at Leipzig's Hochschule "Felix Mendelssohn-Bartholdy" from 1990 to 1994. During that time, she already made her movie debut in small supporting part in "Der grüne Heinrich" ("The Green Henry", 1993). After her graduation, she became a cast member of Potsdam's Hans Otto theatre where she starred in productions of classic plays such as "Faust" or "Twelfth Night". Uhl left Hans Otto theatre in 1995 to pursue her acting career as a freelance actor, mainly in film and TV productions. At first, Uhl mainly starred in TV productions such as Peter Patzak's thriller "Ein mörderisches Erbe" (1998), or in "Mein ist die Rache" (1998) alongside Ulrich Noethen.

Uhl made her breakthrough performance in 2000 as a quiet rebel in Volker Schlöndorff's terrorist drama "Die Stille nach dem Schuß" ("The Legends of Rita"). She also won a Silver Bear as Best actress at the 2000 Berlinale for her performance which paved her way to more top-class movie parts. In the process, the part of an unconventional woman who is at the same time rebellious yet sensitive became her signature role. Thus, she played a former squatter in Gregor Schnitzler's highly praised drama "Was tun, wenn"s brennt" ("What to Do in Case of Fire"), portrayed a young woman who falls in love with a contract killer (played by Joachim Król) in the thriller "Lautlos" ("Soundless", 2004), and played a quick-witted Berliner who is looking for love in Andreas Dresen's box office hit "Sommer vorm Balkon" ("Summer in Berlin"). In 2008, she played a leading role in Doris Dörrie's award-winning melodrama "Kirschblüten" (Cherry Blossoms – Hanami), that is featured in the competition of the 2008 Berlinale.

The same year, she was cast in a completely different role in Uli Edel's controversial "Der Baader Meinhof Komplex". In the film, Uhl portrays terrorist Brigitte Mohnhaupt. Just a few months later, she basically switched sides for "Mogadischu", a dramatization of the 1977 hijacking of the Lufthansa plane Landshut: Now Uhl played stewardess Gabriele Dillmann, who is taken hostage by terrorists.

In 2009, Nadja Uhl starred in two acclaimed feature films, the drama "So glücklich war ich noch nie" and the comedy "Männerherzen". For the latter, she was nominated for the 2010 German Film Award. The same year, she was also nominated for the German Television Award for her performance in the crime drama "Der Tote im Spreewald". Uhl went on to play a mother relocating with her family to the jungle in "Dschungelkind" (2011),and also starred in "Männerherzen ... und die ganz ganz große Liebe" (2011), the sequel to the 2009 box office hit.

The following year, she played the leading role in Rainer Kaufmann's "Operation Zucker" ("Operation Sugar", TV), a policewoman who is tracking down a ring of child traffickers. She also received much critical praise for her performance in Christian Schwochow's GDR family chronicle "Der Turm" ("The Tower"): In it she embodied the equally unpredictable and fragile lover of a family father. For both of these roles Uhl received nominations for the Bavarian Television Award in 2013.

Lighter fare was Matthias Schweighöfer's comedy "Schlussmacher" ("The Break Up Man", 2013), in which she played the ex-girlfriend of a man unwilling to separate from her. After a supporting role in Züli Aladag's integration comedy "300 Worte Deutsch", Uhl appeared as a Prussian countess who falls in love with a Comanche in Rainer Matsutani's western "Der Freiheit entgegen" ("Striving for Freedom", TV) in late 2013.

Doris Dörrie cast her in her comedy "Alles inklusive" ("The Whole Shebang", 2014) as the neurotic daughter of a funky older woman from the 1968 generation (Hannelore Elsner); under the direction of Sherry Hormann, Uhl again played a committed policewoman who tries to put a stop to a ring of well-connected pedophiles in "Operation Zucker - Jagdgesellschaft" (2016, TV).

Nadja Uhl had another important TV role in the post-war drama "Ich werde nicht schweigen" (2017, TV), as a war widow who is subjected to unbelievable suffering and injustice (the plot is based on the story of the director Esther Gronenborn's grandmother). She also played an investigator of the German Federal Criminal Police Office in the political thriller "Tod im Internat" (2017) and a prosecutor in the fight against Arab clans in "Gegen die Angst" (2019). The much praised and award-winning three-parter "Preis der Freiheit" ("The Wall", 2019) saw her as one of three sisters in the GDR during the years of upheaval between 1987 and March 1990.

Uhl appeared on the big screen in Moritz Bleibtreu's directorial debut "Cortex" (2020), as the wife of a man plagued by nightmares, who is increasingly unable to distinguish between reality and dream. In the same year, the children's book adaptation "Die Schule der magischen Tiere" (DE/AT 2020) was theatrically released, with Uhl in a central role as class teacher.