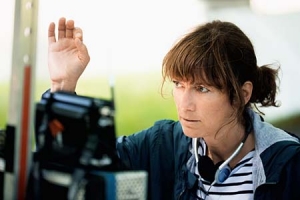 On the set of "Anleitung zum Unglücklichsein" (2012)

Sherry Hormann was born in Kingston, New York, April 20, 1960 as the daughter of a German paintress and an American Jazz-musician. The family moved to Germany in 1966, where Hormann went to school. Aiming to become a concert pianist, she changed her plans when she was 19 and went to the Academy of Television and Film in Munich (HFF). After graduation she worked for Bavaria and Neue Constantin Film as an assistant producer. Hormann was involved in several television and feature films such as "Drei gegen Drei" (1985) and "Die Beute" (1988). Since 1986 she worked as a director, screenwriter and production designer.

Her screenplay debut "Tiger, Löwe, Panther", directed by Dominik Graf, won the prize of the Academy for Performing Arts, Baden-Baden. She also participated in Dominik Graf's "Spieler" (1989). Sherry Hormann and Dominik Graf lived together for several years and have a daughter.

Her directorial debut was "Leise Schatten" ("Silent Shadow", 1991), which was awarded the Max Ophüls Prize in Silver as Best Film, the German Film Prize in Silver for Best Film and two in Gold for Best Actress (Ann-Gisel Glass) and Best Film Music (Enjott Schneider).

In autumn 2012 Hormann's adaptation of Paul Watzlawick's popular book "Anleitung zum Unglücklichsein" was released, only a few months later, in february 2013, the film "3096 Tage" (2013), the adaptation of the eponymous book by Natascha Kampusch, who depicts her abduction and 8-year-long captivity. At the Romy Gala in Austria, the film won Best Camera (Michael Ballhaus).

Hormann's TV film "Operation Zucker - Jagdgesellschaft" (2015), about the machinations of influential paedophiles in politics and business, received much attention and good reviews. Hormann also directed the justice and social drama "Lotte Jäger und das tote Mädchen" (2016) and the two-part journalism thriller "Tödliche Geheimnisse" (“Deadly Leaks “, 2016) for which she was nominated for the German Television Award. As is the case with many of her films, these two productions focused on strong and unconventional female characters who have to find their way in a world dominated by (often corrupt) men.

The tragicomic daughter-father story "Wir lieben das Leben" (2017) with Petra Schmidt-Schaller and Günther Maria Halmer, and the social drama "Vermisst in Berlin" (2018) about a former investigator (Jördis Triebel) who is searching for a missing refugee child, were also reviewed very positively.

At the New York Tribeca Film Festival in April 2019, Sherry Hormann again presented a feature film, her first in six years: "Nur eine Frau" (“A Regular Woman”) traces the fate of Hatun Aynur Sürü (1982-2005), a German-Turkish woman who fell victim to an honour killing by her brothers. The film was released in German cinemas in May 2019.