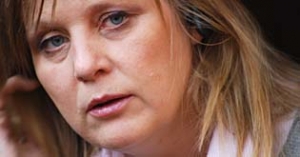 Esther Gronenborn, born in Oldenburg in 1966, grew up in Stuttgart and already made her first experience with films as a teenager when she made experimental films on Super-8 and Video and participated in the cultural project "Jugend Kritisches Theater project".

In 1985, she was one of the founding members of the film projection and artist group Wand 5 e.V. that dealt with underground films and multimedia projects and that until today puts on the film festival Stuttgarter Filmwinter. Gronenborn started to study literary studies and philosophy in Berlin and Stuttgart but dropped out of university in 1990 to enroll at Munich’s Hochschule für Fernsehen und Film (HFF), with a focus on documentary film. During her studies, she already finished several documentary films and short films as well as music video clips. Furthermore, she worked as a director for the Munich off theatre "Ex Libris".

After an interlude as a film critic for the Munich-based online magazine "Artechock" and several stays abroad, Gronenborn went to Berlin in 1995 where she directed music video clips for the production company DoRo. In 2000, she made her debut on the movie screen with the teenage drama "alaska.de". The film was shown at several international festivals and Gronenborn won the German film award and the Bavarian film award as "Best director", among other awards.