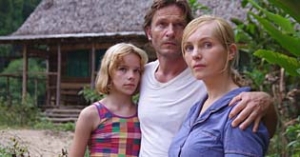 Based on the bestselling novel of the same name by Sabine Kuegler, the film tells the true story of a German girl who spent her childhood with a previously unknown tribe in the jungle of West Papua: A linguistic research mission brings the parents of eight year old Sabine to the jungle of the Fayu. Far off the western civilization, she grows up as a child of the jungle, but the wilderness holds dangers of its own. When a war breaks out between the Fayu and another tribe, the close friendship to Auri, a boy of the enemy tribe, almost puts Sabine and her family between the two factions.

At the age of 16, Sabine returns to Germany - a completely alien world to her.