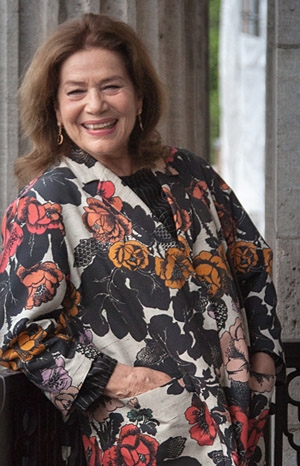 Hannelore Elsner at the Deutsches Filmmuseum on April 26, 2015

Hannelore Elsner was born July 26, 1942, in Burghausen/Upper Bavaria. She spent her schooldays in Bavarian convent schools. After finishing acting school, Elsner worked at theaters in Munich and Berlin, including the Munich Kammerspiele. In the late 1950s, she started her film career with roles in movies such as "Immer die Mädchen" and "Freddy unter fremden Sternen". During the 1960s and the 1970s, she starred in several other entertainment films such as "Die Lümmel von der ersten Bank" and "Willi wird das Kind schon schaukeln".

After she had caught the attention of the young German auteur directors, Elsner was soon regarded as one of the most erotic women in German cinema. She starred in Edgar Reitz's "Die Reise nach Wien" (1973) as well as Alf Brustellin's "Berlinger" (1975). In the following years, she had to cut down her stage performances due to her increasing work for the big screen. From the 1970s onwards, Elsner could also be seen on television. Her credits include TV series such as "Die schöne Marianne" (1975), in which she played the leading role, "Die Schwarzwaldklinik", and "Tatort". Furthermore, she worked with directors such as Dieter Wedel ("Schwarz Rot Gold") and Uli Edel ("Eine Art von Zorn").

Hannelore Elsner gained huge popularity with her leading role in the TV series "Die Kommissarin". From 1994 until 2006, she played the title character Leo Sommer in more than sixty episodes. Her performance won her several awards. Intermittently, she rarely appeared on the big screen: In 1985, she played the leading role in "Marie Ward – Zwischen Bett und Galgen".

Her big screen comeback came with Oskar Roehler's "Die Unberührbare", in which she played the eccentric writer Hanna Flanders for whom the downfall of the German Democratic Republic means the end of all her ideals. Hannelore Elsner received numerous awards for her impressive portrayal of this broken character, including the German Film Award in the year 2000. Two years later, she won another German Film Award for her performance in Oliver Hirschbiegel's "Mein letzter Film". In 2005, she achieved a nomination for her role in Dani Levy's comedy "Alles auf Zucker" ("Go for Zucker!").

Since "Rot und Blau" (2003), Elsner has played leading roles in several of Rudolf Thome's movies, most recently in "Das Sichtbare und das Unsichtbare" (2007). In 2007, she could also be seen in in Angelina Maccarone's women's road movie "Vivere". In 2008, Hannelore Elsner achieved another German Film Award nomination, this time as Best Supporting Actress for her role in Doris Dörrie's "Kirschblüten - Hanami" ("Cherry Blossoms").

Elsner remained in high-demand: In 2010 alone, she appeared in six TV and film productions, and her roles included the mother of rap star Bushido in "Zeiten ändern Dich" ("Electro Ghetto"), the headmistress of a boarding school in "Hanni & Nanni" and the strict head of a dynasty in Kai Wessel's TV drama "Alles Liebe". She had another memorable leading role in Hans Steinbichler's 2011 release "Das Blaue vom Himmel" ("Promising the Moon"), playing a widow suffering from dementia, whose grown-up daughter discovers a long-kept family secret. The same year, she starred alongside Anna Thalbach and Armin Rohde in the ensemble comedy "Kein Sex ist auch keine Lösung". After guest-starring in the TV series "Das Traumschiff", she reprised her role as the school headmaster for the sequel "Hanni & Nanni 2" and played a rigid mother-in-law in Marcus H. Rosenmüller's comedy "Wer's glaubt, wird selig" ("Don't You Believe It!").

Elsner next appeared in "Jesus liebt mich" ("Jesus Loves Me") and the third installment of the "Hanni und Nanni" series, before re-teaming with director Doris Dörrie for the melancholic comedy "alles inklusive" (2014), in which she plays an aging hippie who is confronted with her eventful past.

In 2018 the TV production "Der große Rudolph" celebrated its premiere at the Filmfest Munich. The award-winning drama featured Elsner as the scheming mother of Munich's illustrious fashion king Rudolph Moshammer. In March 2019, "Kirschblüten & Dämonen", Doris Dörrie's sequel to her successful film "Kirschblüten - Hanami" premiered in German cinemas, with Elsner once more in the role of Trudi alongside Elmar Wepper.

Posthumously Elsner will be seen on the big screen two more times in 2019: In the anthology film "Berlin I Love You" and in Hans Steinbichler's "Hannes".

Besides two German film awards, Hannelore Elsner received numerous other nominations and awards in the course of her career, e.g. the Bundesverdienstkreuz 1. Klasse (2005), the Bayerischer Verdienstorden (2008) and honorary awards at the Bayerischer Filmpreis 2010 and the Hessischer Film- und Kinopreis 2012 to name but a few.