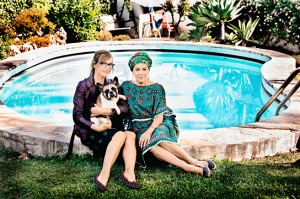 Thirtysomething Apple has no fond memories of her childhood: As the daughter of an erratic hippie mother from the Sixties, she had a rather chaotic upbringing in Southern Spain. And she still feels the repercussions of these early experiences: Apple's attempts at romantic relationships don't seem to work , and she only feels understood by her dog. In contrast, her mother Ingrid, while being over sixty years old, is still a free-spirited rebel. After three decades, she returns to the beachfront of her hippie days – but this time as a regular tourist. The former flower power paradise has long been replaced by run-of-the-mill hotels and cheap clubs. Trying to get away from the loud teenage parties, Ingrid meets a boat refugee and Tim – or Tina – a transvestite. This new acquaintance unexpectedly forces Ingrid to face suppressed chapters of her past. Moreover, Apple arrives in Spain to visit her mother – and is in for a surprise.