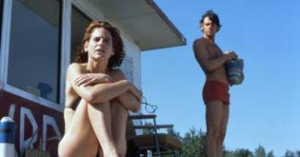 The Legends of Rita

West Germany in the 1970s. The time is marked by a spirit of anarchy and rebellion. Rita Vogt is seduced into the terrorist movement through her sense of justice and her love for Andi. A few years later, realizing that the movement is falling apart, she goes underground, hiding out in East Germany. With the help of the Stasi Secret Service Agent, Erwin Hull, she assumes a new identity amidst the everyday world of the working class where she is befriended by a young co-worker, Tatjana.

As much as Rita wants to fit into her surroundings, Tatjana yearns to get out, to escape to the West. Nonetheless, they form a deep friendship, which is brought to an abrupt end when a report on West German television blows Rita′s cover. Rita must disappear again, but this time a new name and a new city bring her luck. While on vacation, Rita meets Jochen, a university student working as a lifeguard. When he is posted to Moscow, he asks her to come with him, to be his wife and raise a family. But in the end Rita′s past catches up with her - 1989 brings the fall of the Berlin Wall. East Germany is gone, and with it, her new life.