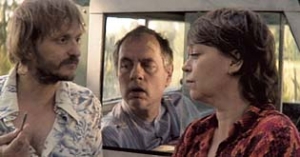 Ina has just been released from prison. Searching for a new life, she returns to the place where she spent her childhood. In her mother’s house, which has been empty for thirty years, she comes across sometime desperado Domühl. Hagen, who is mentally disabled and lives in a home, is looking for his uncle. His search also brings him to this unusual spot in the middle of nowhere, south of Berlin. Somewhere between the sky and the concrete detritus, between now and then, lies "Old Camp", which, at one time, was one of the Soviet army’s largest military bases.

Hagen mistakenly finds his uncle in Domühl, a bankrupt, not-always-sober scaffolder. His father’s death left Domühl with not just the scaffolding firm but also the vast military base that his father bought with German marks before freezing to death on a scaffold. Domühl, who is something of a maverick with his cowboy boots, his leftover boyish dreams and his boozing, has been trying to cope with his legacy ever since. But when Ina moves into the house and Hagen and his rat moves into his apartment, Domühl’s life begins to change. Only after several failed attempts to shake off Hagen does it dawn on Domühl just how valuable their relationship is. But he’s a long and uncharted course to plot before he comes to this realisation. Lying ahead are both the reality of living with someone who is ′mentally challenged′ and the acknowledgement of his longing for Ina. A story about people of our time and their need to assume responsibility. A film of hope that is also a journey into the future.