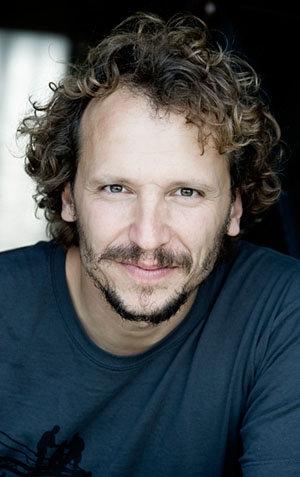 Marcus Hausham Rosenmüller, born in 1973 in Tegernsee, began a course of study at the Münchner Hochschule für Fernsehen und Film (HFF, Munich Academy for Television and Film) following his Abitur. Before graduating in 2003, he had already called attention to himself with his short films: "Hotel Deepa", "Kümmel und Korn" ("Caraway and Corn"), and "Nur Schreiner machen Frauen glücklich" ("Only Joiners Make Women Happy"), which were shown at various international festivals and awarded miscellaneous audience prizes.

Following his studies, Rosenmüller produced multiple episodes of the documentary series "Irgendwo in Bayern" ("Somewhere in Bavaria") for Bavarian radio; he co-directed one such episode, "Den Frieden in der Hand" ("Peace at Hand"), with Joseph Vilsmaier. With the award-winning Bajuwaric comedy "Wer früher stirbt ist länger tot" ("Grave Decisions"), about a boy from small-town Upper Bavaria who dreams of attaining "immortality" as a rockstar, Rosenmüller makes his 2006 feature-film debut.

With "Beste Zeit" ("Best Times"), a charming coming-of-age story about the friendship of two teenage girls, Rosenmüller achieved another critical success. Less than a half year after the film"s premiere, the sequel "Beste Gegend" was completed.

He remained faithful to his preference for stories rooted in his Bavarian homeland in his subsequent films, too: "Räuber Kneißl" (2008) tells the story of a legendary Bavarian folk hero; "Die Perlmutterfarbe" ("Little White Lies", 2009) is about a schoolboy getting into trouble in a Bavarian village in 1931; and the comedy "Sommer in Orange" ("My Life in Orange"), released in August 2011 and based on actual events, focuses on a Bhagwan commune in Bavaria in the early 1980s. Late in 2011, "Sommer der Gaukler" was released, a historical tragicomedy about a theatre group getting stuck in a mountain village around 1780.

After directing a couple of scenes for the Bavarian crime comedy "Pension Freiheit", seemingly tireless Rosenmüller took to his next feature film: The comedy "Wer's glaubt, wird selig" ("Don't You Believe It!") tells the story of the citizens of a Bavarian ski village who try to generate media attention and boost tourism by having a recently deceased woman canonized. In 2014, Rosenmüller concluded his film trilogy about two young girls from rural Bavaria with "Beste Chance" ("Best Chance").

At the same time Rosenmüller realised "Hubert von Goisern - Brenna tuat's schon lang" (2013-2015), a documentary about musician and songwriter Hubert von Goisern. The film won the Austrian film award "Romy" in the category "Best Documentary". In 2016/17 he was involved in the film project "24 h Bayern - Ein Tag Heimat" with a number of other directors. A year later he started shooting his new film "Trautmann" about the football player Bernd Trautmann. Before the film got his theatrical release, Rosenmüller began shooting his next feature film "Unheimlich perfekte Freunde" ("Double Trouble - The Magical Mirror") about two ten-year-old boys, whose mirror images suddenly come to life.

Rosenmüller also remained true to his penchant for Bavarian folk stories with the screenplay for "Der Boandlkramer und die ewige Liebe" (2019). Together with Johannes Kaltenhauser, he made the documentary "Dreiviertelblut - Weltraumtouristen" (2020), about the idiosyncratic band Dreiviertelblut.

In September 2021, his tragicomedy "Beckenrand Sheriff", about a grumpy Bavarian small-town lifeguard who wants to save his ailing swimming pool from closure, was launched.