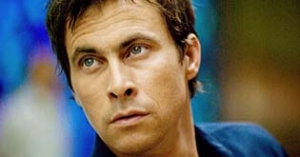 Marc Hosemann was born in Hamburg in 1970. He worked as a mail man after finishing school before attending Hamburg's Hochschule für Musik und darstellende Kunst and graduating from the École international de Théâtre Jacques Lecog in Paris. During this time he already played minor parts in Janek Rieke’s short films "Die hirnlose Frau" and "Neulich am Deich" before making his stage debut in Brecht's "Mutter Courage" at Hamburg's Thalia Theater. He then played in Falk Richter's two-person-play "Kult" at the Schauspielhaus Düsseldorf and from 1998 on alongside Bibiana Beglau in Thomas Ostermaier's "Disco Pigs", which was performed in Hamburg and Berlin, alternately.

In 1996, Hosemann was seen on television for the first time and made appearances in TV series such as "Alles außer Mord", "Sperling" and "SOKO 5113". Following some supporting parts in movies like "Härtetest" and "Kurz und schmerzlos" ("Short Sharp Shock"), and the part of a sensitive derelict in Detlev Buck's "Liebe Deine Nächste", Hosemann played his first leading part in Rainer Kaufmann's thriller "Long Hello and Short Goodbye" alongside Nicolette Krebitz.

He then performed in various German and international TV productions and movies, like Adan Rudolph's "Investigating Sex" (2001). Ralf Huettner's romantic comedy "Reine Formsache" ("A Mere Formality") saw Hosemann in another leading role. He plays a husband facing a divorce who tries to win his wife back. The same year, Hosemann was part of the cast of the episode film "Schwarze Schafe" ("Black Sheep", 2006, director: Oliver Rihs) in which he played a hand model bleeding for money who attempts a drastic form of insurance fraud in order to get back on track. In Ed Herzog's "Schwesterherz" ("Twisted Sister", 2006) he featured in a minor role as the boyfriend of the lead played by Heike Makatsch. He was also cast in a small but very poignant role as a bon vivant in Nicolette Krebitz's much acclaimed drama "Das Herz ist ein dunkler Wald" ("The Heart is a Dark Forest", 2007).

After a couple of roles in television, for example as the rebellious cokehead son of a bourgeois patriarch in Rainer Kaufmann's tragicomedy "Das Beste kommt erst" (2008), Hosemann returned to the big screen in Fatih Akin's comedy "Soul Kitchen" (2009) as a dubious buddy of Moritz Bleibtreu and as an investigator in Till Endemann's comedy "Vater Morgana" (2010). In "Oh Boy" ("A Coffee in Berlin", 2012), a multiple award-winning film that received both critical and popular acclaim, he featured in a pivotal role as an unsuccessful actor who roams the streets of Berlin along with the main character played by Tom Schilling. All along, made-for-TV films and series were a mainstay for Hosemann. Worth mentioning are Hendrik Handloegten's thriller "Sechzehneichen" (2012), where he plays a member of a suspiciously perfect gated community; the tragicomedy "Vier kriegen ein Kind" (2014) as well as the three sequels to "Das Beste kommt erst" in which Hosemann returned in his role as the rebellious son: "In den besten Familien" (2012), "Beste Bescherung" (2013) und "Das Beste aller Leben" (2015).

On the big screen, he was part of the cast of two Lars Kraume films: The much-acclaimed road movie "Meine Schwestern" ("My Sisters", 2013) and the bitter drama "Familienfest" (2015) where he reprised the role of an authoritative patriarch's son.

In 2016, the scathing satire "Affenkönig" by "Schwarze Schafe" director Oliver Rihs premiered at the Filmfest München. Hosemann stars as a high school friend of a parvenu who invites his old class mates on a trip to Southern France in order to show off his prosperity. 2016 held two more films in store for Hosemann: Arne Feldhusen's "Magical Mystery", based on Sven Regener's novel, and "Zwei im falschen Film" featuring Laura Tonke, about a couple who question their relationship after watching a romantic movie. Both films will open in German theaters in 2017.

Aside from his film work, Hosemann still performs on stage. Since 2002, he is a cast member of the Berliner Volksbühne, where he performed in Frank Castorf's production of "Berlin Alexanderplatz" and others.