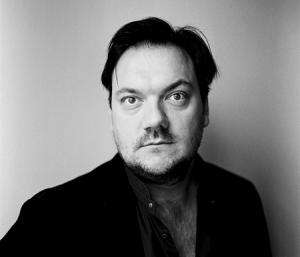 Charly Hübner was born in Neustrelitz on December 4th 1972. Beginning in 1991, he gathered first experiences as an actor and assistant director at the local theatre. From 1993 until 1997, he studied acting at the renowned "Ernst Busch Academy" in Berlin. During that time, he already appeared in plays at the "Maxim Gorki Theatre" and the "Schaubühne". Following his graduation in 1997, he performed at the "Schauspielhaus", the "TAT – Theater im Turm" – which are both based in Frankfurt –and at the "Schaubühne" in Berlin.

He then focused more on film and television: He had supporting roles in theatrical releases like "Männer wie wir" ("Balls", 2004) and made-for-TV productions like "Das Zimmermädchen und der Millionär" (2004), and also guest-starred in several "Tatort" episodes. In 2005, he starred in the ensemble tragicomedy "Im Schwitzkasten" ("No Swaet"), followed by a memorable turn as an officer of East-Germany's secret police in the award-winning drama "Das Leben der Anderen" ("The Lives of Others", 2006). After starring in the short-lived TV series "Post Mortem", he became a regular cast member of the comedy series "Ladykracher". Since 2010, Hübner stars alongside Anneke Kim Sarnau as a police detective in the Rostock edition of the "Polizeiruf 110" series, a part for which he won the 2013 Bavarian Television Award.

After getting rave reviews for his performance in the drama "Unter Nachbarn", Hübner starred opposite Christiane Paul in the tragicomedy "Eltern" ("Parents", 2013). The same year, he played the male lead in the thriller "Banklady". In the children's film "Bibi & Tina – Der Film" (2014), he played a conniving businessman and opponent of the two young lead characters. He also appeared in that same role in the film's sequels "Bibi & Tina: Voll verhext!" (2014, "Bibi & Tina: Bewildered and bewitched") and "Bibi und Tina 3 – Mädchen gegen Jungs" (2016, "Bibi und Tina – Girls vs. Boys"). The tragic comedy "Ohne Dich" (2014, "Without You"), in which Hübner portrays a psychotherapist, whose terminally ill wife wants him to help her commit suicide, targeted a more adult audience. In Christian Schwochow's "Bornholmer Straße" (2014), he played a GDR lieutenant, who opens the border crossing to West Germany in the night of November 9th without authorization.

After starring in four TV productions in 2015, Hübner returned to the big screen in 2016. Amongst others, he portrayed Swiss writer Emil Ludwig in Maria Schrader's "Vor der Morgenröte – Stefan Zweig in Amerika" ("Stefan Zweig - Farewell to Europe") and appeared in a supporting role as the mysterious Kreschimir, a companion of the main character, in Andreas Dresen's new adaptation of James Krüss's "Timm Thaler" ("The Legend of Timm Thaler or the Boy Who Sold His Laughter"). In the 2017 adaptation of Sven Regener's novel "Magical Mystery oder: Die Rückkehr des Karl Schmidt", Hübner stars in the title role as an artist, who after meeting some old friends finds himself on a mad road trip across Germany – as the designated driver.

Hübner next starred in the comedies "Fühlen Sie sich manchmal ausgebrannt und leer?" (DE/NL 2017) and Jürgen - Heute wird gelebt" (2017, TV). At the 2017 Festival DOK Leipzig he presented his first feature-length film as director: "Wildes Herz" (co-directed by Sebastian Schultz) portrays the East-German punk rock band Feine Sahne Fischfilet. The documentary won the DEFA-Förderpreis, the Gedanken-Aufschluss-Preis, the Dokumentarfilmpreis des Goethe-Instituts and the Preis der Vereinten Dienstleistungsgewerkschaft ver.di. It was released theatrically in Germany on April 12 2018. The same day saw also therelease of the Romy Schneider biopic "3 Tage in Quiberon" (DE/AT/FR), which premiered in the competition of the 2018 Berlin IFF and stars Hübner in the role of renowned news photographer Robert Lebeck.

At the German Film Awards 2018, Hübner was nominated for this part for Best Supporting Actor.

He then appeared in a number of TV productions. In the thriller "Angst in meinem Kopf" (2018) he played a sex murderer; he was part of the main cast of Jan Georg Schütte's improvised comedy and mini-series "Klassentreffen" (2019) and had a supporting role in Eoin Moore's tragicomedy "Sommer nach dem Abitur" ("The Summer After Graduation", 2019).

After a feature film role in "Lindenberg! Mach dein Ding" (2020), in which he played the father of the title character and real-life musician Udo Lindenberg, he was part of the large ensemble of Matti Geschonneck's TV three-parter "Unterleuten - Das zerrissene Dorf" ("Unterleuten: The Torn Village", 2020). In the Sky-Streaming series "Hausen" (2020) he portayed a janitor who moves into a prefabricated concrete building with his young son, which is haunted by a demon. In the crime series "Polizeiruf 110", Hübner continued to play the investigator Alexander Buckow.