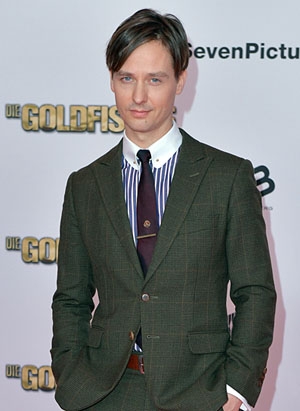 Tom Schilling at the world premiere of "Die Goldfische" in Munich on March 13, 2019

Tom Schilling, born February 10, 1982, in East Berlin, became an actor by chance when director Thomas Heise of Berliner Ensemble met the then 12-year old Schilling on his school yard and asked him to take part in Heise’s production of the play "Im Schlagschatten des Mondes". During the following four years, Schilling appeared in Werner Schroeter's production of "Monsieur Verdoux", and other production at Berliner Ensemble.

In 1999, Schilling moved into the spotlight in the TV movie "Kinder der Gewalt", an episode of the "Tatort" crime series. In the same year, Schilling also made his film debut in the thriller "Schlaraffenland" ("Paradise Mall"). Unfortunately, the film was not too well received by critics and movie goers alike. But still in 1999, Schilling made his breakthrough performance in the leading role of Hans Christian Schmid's successful film "Crazy". In it, Schilling portrayed a pupil of a boarding school who at first comes across as a big show-off but more and more reveals a deep vulnerability. Schilling won the award of "Best young actor" at the Bavarian film awards for this performance.

In his following films, Schilling again portrayed sensitive and insecure characters that are searching for their place in life and society and in doing so follow unorthodox paths. Schilling, for instance, played a bank clerk who turns to managing musicians in "Verschwende Deine Jugend" ("Play It Loud!"); a pubescent politician"s son in Oskar Roehler's "Agnes und seine Brüder" ("Agnes and His Brothers"); the aesthetic son of a fanatic Nazi in "Napola" ("Before The Fall"); or a police cadet who wants to become a sex film director in late 1960s Munich in Marc Rothemund's comedy "Pornorama".

In the same year he played the gay first-aid attendant Krischl in Leander Haußmann's "Warum Männer nicht zuhören und Frauen schlecht einparken" ("Why Men Don’t Listen and Women Can’t Read Maps"), followed by the title role in Haußmann's next film: In "Robert Zimmermann wundert sich über die Liebe" ("Robert Zimmermann Is Tangled Up In Love") he played a hip video game designer whose live is messed up as he falls in love with a single mother.

At the end of 2008 Tom Schilling came to the cinema with the tragicomical road movie "Neben der Spur" ("Tour Excess") that was already shot in 2005. In the same year he appeared in a supporting role in the RAF-drama "Der Baader Meinhof Komplex" ("The Baader Meinhof Complex").

Following several appearances in TV-series such as "Bloch", "Tatort" and "Polizeiruf 110", Schilling met a great challenge with the leading part in Urs Odermatt's adaptation of George Tabori's play "Mein Kampf": Alongside Götz George he embodied the young Adolf Hitler in the film that was released 2011.

He got rave reviews for his lead performance in the existentialist tragic comedy "Oh Boy": Schilling plays a university dropout, who seemingly drifts aimlessly through life until his wealthy father cuts him off financially. Schilling's portrayal of Niko won him the Best Actor Award at the 2012 Oldenburg Film Festival. At the end of 2012, he appeared in the role of Price Otto of Bavaria in "Ludwig II".

In a TV adaptation of Büchner's famous drama "Woyzeck" (2012), Schilling impressed audiences and critics alike with his performance as the tormented title character. Following the two-part TV movie "Das Adlon. Eine Familiensaga" (2013), he appeared in the comedy "Hai-Alarm am Müggelsee" ("Shark Alarm at Müggel Lake", 2013) before starring as a reluctant German soldier in WWII in the immensely popular TV miniseries "Unsere Mütter, unsere Väter" ("Generation War", 2013).

Schilling again proved his uncanny knack for portraying sensitive outsiders in the thriller "Who am I – Kein System ist sicher" ("Who Am I - No System Is Safe", 2014), in which he plays a brilliant but lonely hacker who is hunted by intelligence agencies.

The same year, he appeared in the ensemble comedy "Posthumous" (US/DE 2014). After supporting roles in the international co-productions In "Suite Française" (GB/FR/CN/BE 2014) and "Woman in Gold" (GB 2015), Schilling became the lead of Oskar Roehler's "Tod den Hippies!! Es lebe der Punk" ("Punk Berlin 1982, 2015), playing a young punk in 1980s West-Berlin. He next got rave reviews for his portrayal of an undercover cop in the made-for-TV thriller "Auf kurze Distanz" ("Point Blank", 2016, TV). He again played a police officer in Züli Aladağ's "Die Opfer - Vergesst mich nicht" (2016, TV), a part of the trilogy "Mitten in Deutschland: NSU".

In the summer of 2016, Tom Schilling began work on director Florian Henckel von Donnersmarck's "Werk ohne Autor" ("Never Look Away"), a drama inspired by the life of artist Gerhard Richter. He also impersonated a historical personality in Heinrich Breloer's "Brecht", a TV-multiparter about the life of Bertolt Brecht; Schilling played the writer in younger years (1916-33), while Burghart Klaußner played the older Brecht (1947-56).

In 2019 Tom Schilling appeared in the road movie comedy "Die Goldfische" ("The Goldfish") as a corrupt banker who starts an adventurous journey with a group of disabled people, and in the children's film "TKKG" in a supporting role as a teacher. The award-winning drama "Lara" re-united him with "Oh Boy" director Jan-Ole Gerster: In the film he played the son of a dominant mother, the title character Lara (Corinna Harfouch).

After a small supporting role in the milieu study "In Berlin wächst kein Orangenbaum" (2020), Schilling appeared in the title role of Dominik Graf's adaptation of the Erich Kästner novel "Fabian oder Der Gang vor die Hunde" ("Fabian – Going to the Dogs"), which premiered in the Competition of the Berlinale 2021 online due to COVID-19 restrictions. At the same Berlinale, David Schalko's six-part Sky series "Ich und die anderen" ("Me and the Others", AT/DE) was shown, about a man (Schilling) who struggles with himself and the world and is allowed to reshuffle the cards in each episode.

Schilling then joined David Kross and Henry Hübchen in the ensemble of Leander Haußmann's "Stasikomödie" (Release date: May 2022).