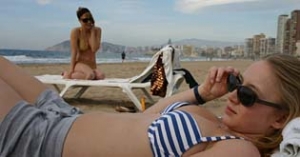 Although music producer Anne is more than preoccupied with an upcoming abortion, that she has not told her boyfriend about, and busy with the usual stress at the record company, she wants to be a nice big sister. So, she takes her sister Marie on a vacation to Benidorm in Spain. But already during the first days of their trip, 18-year old Marie becomes aware of the fact that the admired sister is not the big-hearted, self-confident, and competent person Marie had considered her to be. On the contrary, Anne is only putting up a mask to cover her desparation and bitterness without even noticing it herself.