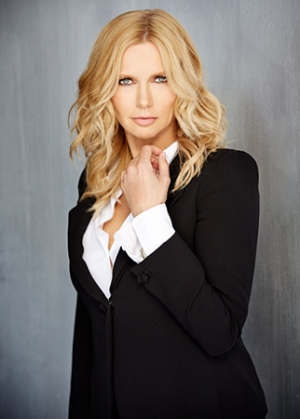 Veronika Maria Cäcilia Ferres was born in Solingen on June 10th, 1965. In 1983 she began studying dramatics at Ludwig-Maximilians-Universität in Munich, but dropped out of her studies very soon. Instead she applied for twelve drama schools – without success. She then took private tuition from Margret Langen, a Max-Reinhardt-Seminar teacher. Meanwhile she was working for Bayrischer Rundfunk and as an extra at the movies.

In 1985 she became a state-approved actress and started working for the Bayerische Staatstheater. Until 1990 several engagements followed, mostly at small theatres but also at the Residenztheater in Munich and the Landestheater in Coburg.

Her first speaking part was in the 1986 comedy "Der Unsichtbare" by Ulf Miehe, followed by a part as supporting actor in the 1987 feature "Die Geierwally". Movie audiences got to know her thanks to her part as Muse Martha in "Schtonk", a 1992 satire about the Hitler diaries by Helmut Dietl starring Götz George and Uwe Ochsenknecht. For her performance she was awarded with the Bambi later that year, on the downside the image of the naïve, voluptuous blonde would haunt her for several years.

In 1995 Ferres played her first leading part. She was "Das Superweib" ("The Super Wife") in the Sönke Wortman adaptation of the Hera Lind bestseller novel. Both, the Lind novel and the film, became a huge success. In "Honigmond" ("Honey Moon"), a film by Gabriel Barylli starring Julia Stemberger and Anica Dobra, she played Barbara, the deceived wife, but the comedy was a failure at box office. Other major productions she worked on the following years were "Rossini oder die mörderische Frage, wer mit wem schlief" ("Rossini", 1996) by director Helmut Dietl, then her companion in life, "Late Show" (1998) – again by Dietl – a cynical statement about the media starring Thomas Gottschalk and Harald Schmidt, and "Die Braut" ("The Bride", 1998) by Egon Günther, in which she played Christiane Vulpius, the wife of Johann Wolfgang von Goethe. In 2001 Ferres impersonates Nelly Kröger-Mann, the second wife of Heinrich Mann, in the TV-mini series "Die Manns – Ein Jahrhundertroman" ("The Manns - Novel of a Century").

In the following years, besides several works for television like Roland Suso Richter's drama "Sterne leuchten auch auch am Tag" (2004) and the two elaborate two-parted "Neger, Neger, Schornsteinfeger" (2006) and "Die Frau vom Checkpoint Charlie" (2007), Ferres appeared in the feature films "Klimt" by Raoul Ruiz and the girlfriend-movies about the "Wild Chicks" where she plays a mother. American director Paul Schrader also casted her for his international production of "Adam Resurrected" (2008).

In 2009 Veronica Ferres plays another main role in a feature film: In "Unter Bauern – Retter in der Nacht" ("Saviors in the Night"), directed by Ludi Boeken and based on a true story, she plays a jewish woman, who together with her family is hidden by peasants for two years, to save them from being deported by the Nazis.

In 2013, she returned to the big screen with roles in the fantasy film "Rubinrot" ("Ruby Red"), the satire "König von Deutschland" ("King Ordinary") and the biopic "Der Teufelsgeiger" ("The Devil's Violinist"). The following year, she starred opposite Dominic Raacke in the romantic TV comedy "Das Glück der Anderen", and played the role of a German chancellor who happens to fall on love with the French president in the made-for-TV comedy "Die Staatsaffäre". After director Peter Chelsom did cast her as a fortune teller in the German-Canadian co-production "Hectors Reise oder die Suche nach dem Glück" ("Hector and the Search for Happiness", 2014), Veronica Ferres reprised her role from "Rubinrot" for the sequel "Saphirblau" ("Sapphire Blue"). Moreover, she appeared in the international co-production "Casanova Variations" (2014) and reprised her starring role for a third "Lena Fauch" entry.

Following a cameo in "Der Nanny" (2015), Ferres starred opposite Heiner Lauterbach in the TV drama "Meister des Todes" (2015) before playing a supporting role in Uli Edel's horror film "Pay the Ghost" (2015). Werner Herzog cast her as the female lead in "Salt and Fire" (DE/US/FR/MX 2016), and in the same year, Ferres also had a major role in the drama "Short Term Memory Loss" (2016).

Lighter fare was the comedy "Unter deutschen Betten" (2017), about a former pop singer (Ferres), who is forced to take on a job as a cleaning lady to make some money. On television, she can be seen in André Erkau's romantic comedy "Liebe auf den ersten Trick" (2018) and in Andreas Herzog's romantic road movie "Unzertrennlich nach Verona" (2018). On the big screen, she starred in supporting roles in the American comedy "The Comedian" (2016) alongside Robert De Niro and alongside Keanu Reeves in the thriller "Siberia" (US 2018). Ferres was also a member of the ensemble of the thriller "Intrigo: Tod eines Autors" ("Intrigo: Death of an Author", 2018), based on the novel by Håkan Nesser.

After a short appearance in Til Schweiger's U.S. remake of "Honig im Kopf," "Head Full Of Honey" (2019), and a central role in the short film "Malou" (2019), Ferres starred in Daniel Harrich's "Meister des Todes 2" (2020, TV): in the highly acclaimed and highly explosive drama based on real-life events, she reprised the role she had in the first part of the film and played the wife of a weapons corporation manager who takes action against the illegal machinations of arms dealers after her husband's death.

In 2021, Ferres was seen in two international feature film productions: in the Canadian-Belgian drug drama "Crisis" and in the Canadian-British tragicomedy "Best Sellers." As a producer, she was involved in the Netflix film "The Unforgivable" (DE/US 2021), directed by Nora Fingscheidt.