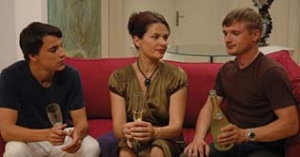 Waiting for Angelina
When a paparazzo learns that Hollywood actress Angelina Jolie is about to move to Berlin, he senses a big story. The flat across from Jolie′s alleged penthouse is vacant and thus the paparazzo without further ado breaks into the appartment to get a good vantage point on the star. However, there is someone else who had the same idea: a lifeguard from the island of Pellworm who is a raving fan of the actress. Although both men pursue the same goal, soon tensions mount between the two of them.