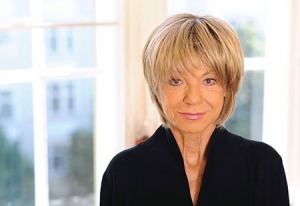 Judy Winter was born on 4 January 1944 as Beate Richard in Friedland (Upper Silesia). After the Second World War, the family left the region and eventually settled in Heidelberg. There, Beate Richard took ballet lessons, but her dream of a career as a ballerina was shattered due to her too tall height of 1.75 meters. She then turned to acting and took acting lessons at the Hochschule für Musik und Darstellende Kunst in Stuttgart (College of Music and Performing Arts) in Stuttgart in 1960. At the end of 1960, at the age of 17, she was hired by Peter Zadek at the Ulmer Theater. For seven years, the two were also a couple. In 1962, Beate Richard adopted the stage name Judy Winter, a tribute to the Hollywood stars Judy Garland and Shelley Winters. The following year she went with Zadek to Theater Bremen, where she appeared on stage until 1970, among others, in Wedekind's "Spring Awakening" and in the musicals "My Fair Lady" and "Hello Dolly".

From the mid-1960s, Winter also participated in television productions such as in a supporting role of Claus Peter Witt's "Drei Tage bis Mitternacht" (1966). Her first movie appearance was in Alfred Vohrer's parodistic sex film "Das gelbe Haus am Pinnasberg" ("The Yellow House in Pinnasburg", 1970) co-starring Eddi Arent. With Vohrer, she made three more movies: In the thriller "Perrak" ("Hard Women", 1970), she was an inscrutable brothel operator, in the Simmel adaptation "Und Jimmy ging zum Regenbogen" ("And Jimmy Went to the Rainbow's Foot", 1971) a paralyzed ex-spy operating a brothel; In Vohrer's sociocritical drama "Liebe ist nur ein Wort" ("Love Is Only a Word", 1971), she played an unhappy banker's wife who starts an affair with a much younger man. For the last two roles, Winter was nominated for the German Film Award for Best Actress in 1972.

Despite these successes, Judy Winter has since rarely been starring in feature films. After leading roles in the comedy "... aber Jonny!" ("...But Johnny!", 1973, with Horst Buchholz) and in the character study "Der Lord von Barmbeck" (1973, directed by Ottokar Runze), as the wife of the Hamburg burglar Julius Adolf Petersen (1882-1933), she has almost exclusively been working for TV. In addition to guest appearances in numerous TV series such as "Sonderdezernat K1", "Der Alte" and "Derrick", Winter, in 1972, starred in Wolfgang Petersen's "Reifezeugnis" ("For Your Love Only"), a classic episode of the "Tatort" crime series, as the wife of a teacher, who has an affair with a student.

On stage, she was celebrated for her performances in the production of Oscar Wilde's "An Ideal Husband" at the Kleine Komödie München (1975) and in the musical "Chicago" at the Thalia Theater Hamburg (1977). In 1979, she released her first record "Sie zu ihm", named after the poem by Kurt Tucholsky. In 1980, Winter took on a starring role in Ulrich Schamoni's "Das Traumhaus", about four young people trying to lead an alternative lifestyle as self-supporters in an idyllic villa. In the same year she starred in "Der Mann, der sich in Luft auflöste" ("The Man Who Went Up in Smoke", DE/HU/SE), an early episode of the crime series "Beck", as the daughter of a missing political journalist. For her portrayal of a pharmacological doctor in "Ärztinnen" ("Woman Doctors", GDR 1984) she received the Best Actress Award at the 3. Nationale Spielfilmfestival (3rd National Feature Film Festival) of the GDR in 1984.

Apart from that, Judy Winter continued to mostly work for television and on stage. In 1981, she belonged to the ensemble of Theodor Kotulla's mini-series "Der Fall Maurizius"; Jürgen Roland cast her in a starring role in his Durbridge thriller "Der Besuch" (1983), and in Berengar Pfahl's "Die Brücke am schwarzen Fluß" (1986) she played an aid worker from the GDR, who falls in love with a West German in Mali. At the Ernst Deutsch Theater in Hamburg she starred in "Mother Courage and her Children" (1981). Starting from the mid-1980s, she mainly worked with the Renaissance-Theater Berlin.

Judy Winter received much critical acclaim for her double role in Cordula Trantow's psychodrama "Besuch" (1989, TV), as a career woman and her neglected twin sister. In an interview, Winter called working with Trantow one of her most formative experiences. She had one of her rare feature film roles as a queen in the much praised, German-Czech fairytale film "Dornröschen" ("Sleeping Beauty", 1990), which adhered meticulously to the original text. Major television films of the 1990s, she starred in, were the satire "Club Las Piranjas" (1995, as a holiday club director), the custody drama "Wem gehört Tobias?" ("In the Wrong Hands", 1995, as a scheming grandmother) and the dietmania satire "Durch dick & dünn" (1998) with Jürgen Tarrach. Winter also continued guest starring in series such as "Ein Fall für Zwei" (1994) and "Im Namen des Gesetzes" (1998).

A massive success was her performance in the stage play "Marlene" in 1998, in which she portrayed the aging Marlene Dietrich. After the acclaimed premiere at the Berlin Renaissance Theater, she performed this role more than 550 times over the next few years and decades - with guest appearances in 62 cities and seven countries.

In the 2000s, Winter again starred in a number of television films, including the thrillers "Mädchen, böses Mädchen" and "Sommernachtstod" (both 2003, as the mother of the respective detective inspector) and the crime drama "Eine Nacht im Grandhotel" ("A Night at the Grand Hotel", 2008, as a noble hotel guest). On the big screen, she could be seen in the Edgar Wallace parody "Neues vom Wixxer" ("The Vexxer", 2007), as a mysterious nun named Sister Lucipha. For Carlo Rola's TV remake of "Und Jimmy ging zum Regenbogen" ("And Jimmy Went to the Rainbow", 2008), she again took on the role of ex-double agent and brothel operator Nora Hill.

Winter won the German Television Award for Best Actress for her part in Edward Berger's comedy "Mutter muss weg" (2012), in which she played the bossy mother of an unemployed dreamer. She had a recurring lead role as an idiosyncratic mother-in-law in the family TV film "Tief durchatmen, die Familie kommt" (2015), and its sequels "Von Erholung war nie die Rede" (2017) and "Ihr seid natürlich eingeladen" (2018). Overall, Winter's TV filmography includes more than 100 roles. In addition, she continued to appear regularly in stage productions, including at the St. Pauli Theater Hamburg and the Berlin Renaissance Theater, where in February 2018 "Marlene" was last performed.

Throughout her career, Judy Winter has also always been a sought-after voice actress. Over the decades, she has lent her voice to Shirley MacLaine, Jane Fonda, Bette Midler and Vanessa Redgrave. In addition to that, she has participated in numerous audio play productions (for example "Perry Rhodan", "Die Drei ???", "TKKG"). She was also always active in social matters. For her many years of involvement in HIV prevention and support of AIDS organisations, Winter was honoured repeatedly, among other things with the Federal Cross of Merit: first in 2001, and again in 2014 with the Federal Cross of Merit 1st class.

Judy Winter was married to actor Joachim Regelien and later to jazz musician Rolf Kühn. Their adoptive son Francis C. Winter is an actor and playwright. She lives in Berlin.