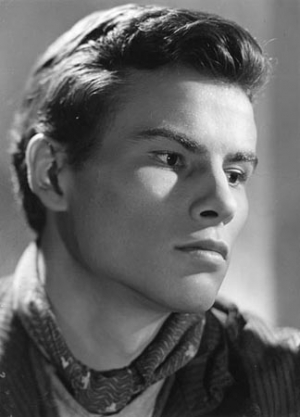 Horst Werner Buchholz was born in Berlin-Neukölln on December 4th 1933. His father was a cobbler specialized in making orthopaedic shoes. Buchholz grew up in the inner-city district Prenzlauer Berg and after the bombardment of Berlin in 1943, he was evacuted to a chidren's home in Schlesien. At the end of the war he was in Czechoslovakia and returned to Berlin on his own. Being forced to earn a living, he debuted on stage at the tender age of fourteen, playing an extra in "Das Dreimäderlhaus" at the Metropol theatre in East Berlin. He got his first speaking part in the stage adaptation of Erich Kästner's "Emil und die Detektive", while the same time working as a synch artist for motion pictures and performing in radio programmes.

In 1950, Buchholz left school and privately financed his acting lessons with teacher Maliese Ludwig. The same year, his stage career started to blossom, and until 1955, he continuously worked at several theatres in Berlin.

His movie career really began with a part in "Marianne", a German-French co-production directed by Julien Duvivier. His first big success was Helmut Käutner's award-winning drama "Himmel ohne Sterne", in which Buchholz played the young Russian Micha. But it was in 1955 when he delivered his true breakthrough performance as the adolescent misfit in Georg Tressler's youth drama "Die Halbstarken", which made Buchholz – who was now affectionately called "Hotte" by press and public alike – a genuine movie star and pop icon in Germany. And for many years to come, legions of fans would idolize him as the German James Dean.

Buchholz followed this landmark hit with prolific parts in "Robinson soll nicht sterben" and "Monpti", both times starring alongside Romy Schneider. He then demonstrated his knack for comedy as a charming con artist in "Bekenntnisse des Hochstaplers Felix Krull", and finally received international recognition for his performances in the British production "Tiger Bay" and in Georg Tressler's powerful drama "Das Totenschiff".

In the autumn of 1959, Buchholz performed the title role in the Broadway production of Colette's "Chéri", before he also rose to movie stardom in the US by joining the illustrious cast of John Sturges' seminal Western "The Magnificent Seven". Until the final decline of the Hollywood studio system in the late 1960s, Buchholz was the star of many international movie productions, among them "Fanny" by Joshua Logan and most notably Billy Wilder's hilarious, albeit historically mistimed comedy "One, Two, Three", which cleverly ridiculed the ideological tensions between East and West Germany. As part of a stellar cast, Buchholz brilliantly portrayed the fierce young communist Otto Ludwig Piffl, who finally converts to capitalism.

In the 1970s, he appeared in German productions like "...aber Jonny!" and "Lohngelder für Pittsville", but ultimately failed to establish himself within the new generation of filmmakers now defining German cinema. Consequently, Buchholz had to resort to television, where he guest starred in numerous series in Germany and abroad. After starring in Andrew V. McLaglen's ill-fated desert romp "Sahara" in 1982, he impressively returned to form with his award-winning turn in "Wenn ich mich fürchte…". Apart from appearing in high-profile TV-productions, Buchholz returned to the big screen for Wim Wenders' poetic fable "In weiter Ferne so nah!" and finally had a real cinema comeback as an ambiguous Nazi doctor in Roberto Benigni's internationally acclaimed drama "La vita è bella" (1997).

Buchholz, who also frequently returned to the theatre since the late 1970s, married the former French actress Myriam Bru in 1958. The couple resided for many years in Paris and in Switzerland.

On the 3rd of March 2003, Horst Buchholz passed away in the Charité hospital in Berlin after suffering from a severe case of pneumonia.