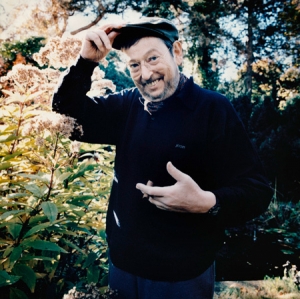 Ulrich Schamoni was born in Berlin on November 9, 1939 to a filmmakers couple. His mother Maria was a screenwriter, his father, Dr. Victor Schamoni, was a film scholar, who was the first in Germany to write a doctoral thesis on film ("Das Lichtspiel, Möglichkeiten des absoluten Films", 1926). He also worked as director, producer and distributor (Fama-Film in Berlin). In 1942, the father was killed in WWII. A year later, his widow and four sons, Victor, Jr., Peter, Thomas, and Ulrich were bombed out in Berlin and evacuated to East Prussia. In 1944, Maria returned with her four children to Westphalia where she and her husband originally came from. They went to live in Werl and later in Münster.

Dropping out of school before graduation, Ulrich Schamoni relocated to Munich in order to start a film career. He attended acting school and worked as an assistant director for renowned filmmakers like Wilhelm Dieterle.

At the age of 20, Schamoni completed his first novel "Dein Sohn lässt grüßen" in which he addressed connections between Catholicism, corruption and the Nazi past. Yet shortly after its publication, the book was deemed to be harmful to minors and could only be sold under the counter.

In 1965, Ulrich Schamoni made his first short: the documentary "Hollywood in Deblatschka Pescara" takes an ironic look at the shooting of the British-German-Yugoslavian large-scale production "Dschingis Khan" – and went on to win the German Film Award and the main prize at the Westdeutschen Kurzfilmtage in Oberhausen. The DoP was no other than Jost Vacano. The same year, Schamoni also made his feature film debut without relying on any public funding: "Es" ("It") tells the story of a young unmarried couple and is regarded as one of the defining works of New German Cinema due to its playful, improvisational style and socio-critical undertones. Loved by audiences and critics alike, "Es" turned out to be a huge success. In 1966, it won a total of five German Film Awards, including Best Direction, Best Actress (Sabine Sinjen), Best Cinematography (Gérard Vandenberg), Best Newcomer (Bruno Dietrich), and the silver award in the category Best Feature Film. The film was also submitted as the official West German contribution to the competition in Cannes and the Academy Awards.

Schamoni's follow-up "Alle Jahre wieder" also won three German Film Awards, including Best Direction, as well as the Silver Bear at the 1967 Berlin IFF. The following year, he made the satire "Quartett im Bett". The film starred the popular music act Jacob Sisters along with comics Ingo Insterburg, Peter Ehlebracht and Jürgen Barz who all were awarded the Ernst-Lubitsch-Preis for their ensemble performance.

Schamoni's following films garnered awards as well, yet they did not enjoy similar box-office success: The romance "Wir-Zwei" ("We Two", 1970), the autobiographical road movie "Eins" ("One", 1971) and the comedy "Chapeau Claque" ("Top Hat", 1974, both starring Schamoni himself in the leading role), and the zeitgeist-comedy "Das Traumhaus" (1980) didn't fulfill commercial expectations. Shifting to television, Schamoni created the shows "Was wären wir ohne uns?" (1980) and "So lebten sie alle Tage" (1984).