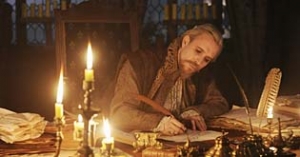 The movie takes up the theories of several renowned literary scholars and investigates the question whether William Shakespeare was perhaps an impostor whose works were written by another, anonymous author. The (fictitious) story is set in 17th century London: Edward de Vere, 17th  Earl of Oxford, is an educated and passionate author. All his secretly composed plays are piled up in a closet. As a member of aristocracy of Elizabethan England his social status prohibits him to publish his works. He pays stage author Ben Jonson to publish them under his name. Despite his initial reservation Jonson agrees and places his reliance on actor William Shakespeare who is not adverse to a drink or two. At the same time de Vere who was banned from the royal court tries to take influence on the power struggles at the palace, thereby relying on the last means which he has left – the theatre.