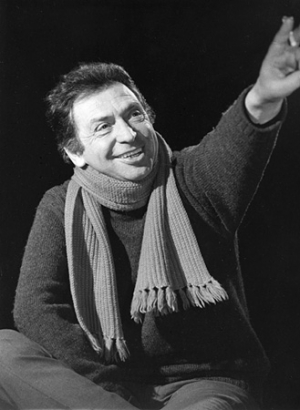 Alfred Adolf Vohrer was born in Stuttgart on December 29, 1914. After graduating from school, he took acting and singing lessons and started to perform on stage. In the late 1930s, he joined the ensemble of the state theatre in Stuttgart, yet this engagement did not last long due to the outbreak of WWII. Vohrer was drafted and fought on the Russian front, where he lost his right arm – which meant the end of his acting career.

Vohrer shifted his interests towards filmmaking. He started out as an intern at the Ufa production company, where he worked under directors like Harald Braun and Alfred Braun. After the end of the war, the lack of actual film production had him shifting yet again, this time to radio broadcasting, where he found quick success, especially as a director of radio plays. He eventually returned to the film industry as a dubbing expert, and in the 1950s, he oversaw the dubbing of over 1000 feature films, including classics like "From Here to Eternity" ("Verdammt in alle Ewigkeit", USA 1954), "The Man with the Golden Arm" ("Der Mann mit dem goldenen Arm", USA 1956), and "Les Quatre Cents Coups" ("Sie küssten und sie schlugen ihn", F 1959).

After his first own film project "Zum Leben verdammt" did not get past the pre-production stage, he took inspiration from US and German releases addressing youth problems like "The Blackboard Jungle" ("Die Saat der Gewalt", USA 1955), "Die Halbstarken" ("The Hooligans", 1956) and "Endstation Liebe" (1957): His debut "Schmutziger Engel" (1958) told the story of a school girl who falls in love with her teacher but then accuses him of sexual harassment when he does not reciprocate her feelings. He stayed true to the genre with his following films "Meine 99 Bräute" (1958), "Verbrechen nach Schulschluß" (1959) and "Mit 17 weint man nicht" (1960).

Although Vohrer once voiced the belief that the success of a film, be it art or not, is decided at the box office, he also frequently said that he wanted to work on more ambitious projects than the popular fare he was known for. This wish was fulfilled with one of his last theatrical releases, the adaptation of Hans Fallada's novel "Jeder stirbt für sich allein" (1975), starring Hildegard Knef and Carl Raddatz. The film got great reviews, and is today considered one of his most accomplished works.

When he ceased to work for the big screen in 1976, Vohrer had already established himself as a director for television. Over the following years, he directed countless episodes of popular German TV shows. Fittingly, it was during the production of an episode of the series "Der Alte", when Alfred Vohrer died in a hotel suite following a heart attack on February 3, 1986.