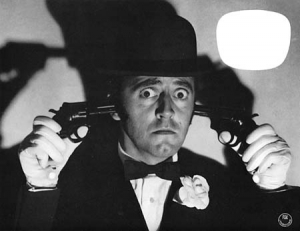 Eddi Arent, born May 5, 1925, in Danzig, attended a humanistic grammar school and was drafted for military service right after his graduation. Although his parents wanted him to become a physician, Arent instead started out with satirical shows. In 1948, Jürgen Henkel cast him for a two-year tour with his literary revue "Der Widerspiegel". In the following years, Arent also worked with Werner Finck and others.

Arent  then started his film career with a small part in Geza von Radvany's "Der Arzt von Stalingrad" ("The Doctor of Stalingrad", 1958). In the following years, Arent appeared in numerous films, mostly contrasting the main characters in a shy or loutish manner. In Rialto's first Edgar Wallace production, "Der Frosch mit der Maske" ("Face of the Frog", 1959), Arent played a butler. The film became a huge success. He then appeared in comic episodes in most of the following 40 Edgar Wallace adaptions, either as a butler, an inspector, aristocrat, or tourist. His exxageratedly elegant and reserved attitude of a gentleman became a distinctive feature of the "typecast" of this series. In later films though, his parts became more and more sinister: In "Der Hexer" ("The Mysterious Magician", 1964) Arent was still funny but already became dubious, while in "Das Rätsel des silbernen Dreiecks" ("Circus of Fear") he even played the role of the mass murderer.

In 1982, Arent started his career as a TV comedian. In contrast to the rather superficial parts Arent played in his movies, Arent was able to show his great talent for subtle humour in his series "Es ist angerichtet" that he also co-wrote. He used the same formula – masquerading stars in different situations – for the series "Harald und Eddi" (starting in 1987) together with Harald Juhnke as his partner.

After a ten-year movie hiatus, Arent starred in a small part in Michael Verhoeven's "Mutters Courage" ("My Mother's Courage", 1995). In Romuald Karmakar's "Manila" (2000) Arent played a self-satirizing part as a famous actor. He also echoed his famous parts of the Edgar Wallace films in new TV versions of the Wallace films that RTL aired from 1996 on.