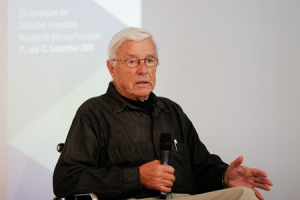 Ottokar Runze at a symposium in Berlin on September 12, 2008

Ottokar Runze was born in Berlin in 1925 and worked as an actor at the Deutsches Theater from 1947-1950. He served as the director of the British Centre's theater in Berlin from 1951-1956 and was then a freelance director on German stages until 1963. He has been an independent film producer since 1968 and began writing and directing feature films and television plays since 1971.