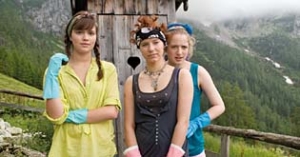 Sequel to the 2008 feature film "Freche Mädchen": Just as everything seemed to turn out great, the three girls have to face new challenges. After an argument with her boyfriend Markus, Mila joins her friends Hanna and Kati on a trip of their school choir to the Bavarian mountains. Mila′s rival Vanessa sees her chance and spends her holiday on the horse farm with Markus. Hanna and Kati also have their own relationship issues: Branko tries to push Hanna′s music career, which is annoying her. Meanwhile, Kati has to decide whether she wants to be with Tobi or the older and more confident Robert.