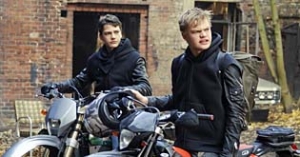 The "Rox" are a feared gang of young rockers who have a strong lock on their Berlin district. At present, their leader Chris is in prison – while his younger brother Flo is in charge of the gang. The two brothers are inseparable and always stick together. But then Flo meets the pretty girl Sofie. The rowdy ghetto rocker and the well-read young woman from an upper-class Berlin family develop a tender love relationship. When Chris is released from prison and starts to plan a dangerous robbery to settle his debts with another gang leader, Flo is confronted with a tough moral conflict because after the robbery fails, Chris demands of his brother to take advantage of Sofie for his purposes.