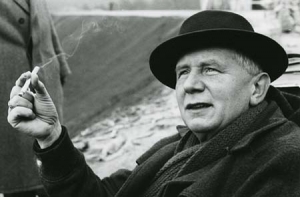 Helmut Käutner was born March 25, 1908, in Düsseldorf, as the son of merchant Paul Läutner and his wife Claire, born Röntgen. In 1916, the family moved to Essen where Käutner attended Helmholtz-Realgymnasium and participated in school theatre performances. After finishing high school in 1926, he took dancing and pantomime lessons at Folkwang school and studied graphics, costume design, set design, and interior design at Kunstgewerbeschule. In 1928, he went to Munich's university to study German studies, philosophy, psychology, art history, and theatre studies. Käutner wrote feuilletons and reviews and attended the theatre seminar of Arthur Kutscher whose students – besides Käutner, Kurt E. Heyne and Bernhard Eichhorn, Käutner's lifelong, close friends – performed in revues and other shows under the name of "Die Zirkusleute".

In the spring of 1930, Käutner formed a cabaret group that also included Heyne, Bobby Todd (= Hans Karl Rohrer), and Werner Kleine, who called themselves "Die vier Nachrichter" from 1931 on. The group became known even beyond Munich with their program "Hier irrt Goethe", a parody about the hype during the "Goethe-Jahr" 1932. From 1932 to 1935, the group made guest performances in Germany, Austria, and in Switzerland. In 1932, they starred together in "Kreuzer Emden" ("Cruiser Emden"). The literary and rather unpolitical group was banned in 1935 for "lack of reliability and aptitude according to national socialist governance". As a result, Todd and Heyne emigrated, while Käutner devoted himself to graphics and interior design again, and wrote chansons and popular songs.

From 1936 on, he worked as an actor at Landesbühne Luisenburg in the Fichtelgebirge, and later at Schauspielhaus Leipzig where he also worked as a director and met his later wife Erika Balqué. On April 3, 1937, his play "Ein Auto geht in See" premiered at Städtische Bühnen Frankfurt, and on December 25, 1937, his play "Juchten und Lavendel", with music by B. Eichhorn, premiered at Schauspielhaus Leipzig, and was later shown at Munich's Kammerspiele and several theatres in Berlin, including Komödie, Staatstheater, Schiffbauerdamm, and Kabarett der Komiker. Besides, Käutner wrote screenplays, most of them together with the author Bobby E. Lüthge.

Käutner's first film as a director, "Kitty und die Weltkonferenz" ("Kitty and the World Conference"), was banned for its alleged pro-British tendencies shortly after its premiere when the war broke out in 1939. Subsequently, Käutner mainly finished deliberately unpolitical films that were situated in the personal realm and did not transport any underlying Nazi ideology. Only in "Auf Wiedersehen, Franziska!" (1940/41), Käutner was instructed by the government department to insert a scene with war propaganda but set the scene off with black stripes and a change of perspective. "Romanze in Moll" ("Romance in a Minor Key", 1942), "Große Freiheit Nr. 7" ("Great Freedom No. 7", 1943/44), and "Unter den Brücken ("Under The Bridges", 1944/45), his last three films before the end of the war, mainly constituted Käutner's international renown for his so-called "poetic realism".

After the end of he war, he set up a contact point for artists in Hamburg, worked for NWDR from the fall of 1945 on (where he produced "Der Hauptmann von Köpenick" as a radio play, among others), and directed plays at Ida Ehre's Hamburger Kammerspiele. Käutner at first received a British, later an American film license that he used for setting up the production company Camera-Film GmbH Hamburg (later: Hamburg-München). Filmed under difficult conditions at original locations, Käutner finished his first post-war film in the winter of 1946/47. "In jenen Tagen" ("Seven Journeys") dealt with the living conditions unter the Nazi regime in seven episodes about the changing owners of a car. In 1946, he also presented "In jenen Tagen" as a theatre production.

Together with Carl Zuckmayer, Käutner wrote the screenplay "Anno 1948", but the film was never realized. He then produced and co-wrote the first film of his longtime assistant director Rudolf Jugert, "Film ohne Titel" ("Film Without Title"), with Käutner's cinematographer Igor Oberberg, and music by B. Eichhorn. After his ambitious, but muddled and unclear films "Der Apfel ist ab" ("The Original Sin", his last film produced by his production company Camera-Film GmbH) and "Epilog" (1950). Käutner was considered to be "worn out".

Besides his work at the theatre (for instance at Schloßpark-Theater Berlin in 1950, and in Bochum in 1952), Käutner often worked as a ghostwriter and revised screenplays but was not able to get sufficient funding for his own projects, for instance, for "Kameliendame 1952", or has to work – according to him – with too small budgets.

In early September 1953, Käutner started to shoot "Die letzte Brücke" ("The Last Bridge") in Yugoslavia that told the story of a physician (Maria Schell) who collaborated with partisans during the war. The film's surprising success brought Käutner back into the first line of German film directors. He then further established his position with films like "Ludwig II." (1954), "Des Teufels General" ("The Devil"s General", 1954/55), "Ein Mädchen aus Flandern" ("The Girl From Flanders", 1955/56), "Der Hauptmann von Köpenick" ("The Captain from Köpenick", 1956), and "Die Zürcher Verlobung" ("The Affairs of Julie", 1956/57). His films received multiple awards and turned out to be national as well as international box office hits. "Der Hauptmann von Köpenick", for instance, won six German film awards, was shown in 53 countries, and is considered to be the first successful German post-war film in the USA).

Visually and performance-wise often outstanding, Käutner's films dealt more or more less explicitly with political topics but did not formulate the expected, consistent political engagement but were mainly informed by his humanistic, ready to compromise attitude that refers to the personal – tragic personal powerlessness or victories of wide-awakeness. However, some critics who regarded Käutner as one of the most promising directors of post-war German film were disappointed: "Käutner's compromises would be easier to bear if they were presented by a director who does not see the real problems. But that is exactly Käutner's special position… he sees the problems more clearly and sharply than others." (Schmieding, 1961).

In the summer of 1956, Käutner made his first trip to the USA where he made a seven-year contract with Universal to make one film a year under ideal conditions. In October he returned to film "Die Zürcher Verlobung" und "Monpti". Together with Wolfgang Staudte and Harald Braun, he set up the production company Freie Film Produktion GmbH, Hamburg, that closely collaborated with Walter Koppel (Real-Film) and Europa-Filmverleih and that was meant to allow every partner to make on film of high artistic quality a year. However, the company realized only one film: Käutner's contemporary film version of "Hamlet", "Der Rest ist Schweigen" ("The Rest Is Silence", 1959), starring Hardy Krüger.

From the summer of 1957 to the spring of 1958, Käutner worked in Hollywood with the intention to make typically American films. Later, he called the two, rather trivial, films he made in the US, "The Restless Years" and "Stranger in My Arms", "unfortunate hybrids". (Eser, 1981).

Käutner was not able to establish himself in 1960s cinema. He neither connected with the New German Cinema nor with commercial entertainment movies. After filming the Franz Seitz produced "Lausbubengeschichten" ("Tales of a Young Scamp", 1964), he focused on TV productions, with the exception of one late foray onto the movie screen with "Feuerzangenbowle" ("The Fire Tongue Bowl", 1970). Käutner mainly directed his own adaptations of theatre plays and ennobled the cast of films like "Babeck" (1968), or "Die Frau in Weiß" (1971). As actor, director, and set designer, Käutner worked at theatres in Bochum, Düsseldorf, Hamburg, Frankfurt, and Berlin. In 1974, Käutner made his probably best performance as a film actor in the title role of Syberberg's "Karl May". His impairing health forced him to several hospital stays before he relocated to Tuscany in November 1977.

Helmut Käutner, a member of Akademie der Künste in West Berlin, of the PEN Center of West Germany, and co-founder of Freunde der Deutschen Kinemathek Berlin e.V., died on April 20, 1980, in his house near Castellina/Chianti, Italy.