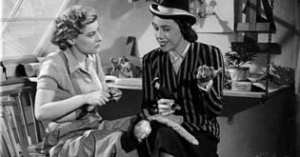 Michael, an internationally successful photo reporter, adores his girl friend Franziska but due to his time-consuming job, he does not have much time to spend with her. Thus, their relationship suffers from his long absences. When Franziska gets pregnant, they marry, and Michael promises to stay with her more. But then he gets a new assignment that leads him to war-torn China. His good friend and buddy Buck accompanies him, as always. After Buck is badly injured and dies in his arms, Michael finally decides to stay with his family. But now it is Franziska who asks him to go to war again, this time as a soldier. This performance of duties makes sense to Franziska and allows her to bear the separation from Michael. Thus, she awaits the return of her husband as many other women do.