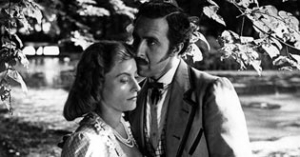 Romance in a Minor Key

Paris, late 19th century. Madeleine leads a double life. She is married to an upright, honorable bank clerk, a model husband who hardly knows his wife. The young composer Michael falls in love with Madeleine; he gives her a valuable pearl necklace because she inspired his "Romance in a Minor Key".

She tells her husband the pearls are only a cheap imitation. While her husband is away, Madeleine and Michael visit the latter′s brother; the rich playboy Viktor falls in love with the woman and leaves no stone unturned in his efforts to make her his. Viktor is appointed manager of the bank in which the unsuspecting husband works; he promotes the husband and transfers him to another branch so that he can devote his attention to Madeleine without interference. When this strategy also proves unfruitful, he tries to blackmail her with his knowledge of her liaison with Michael. In a fit of despair after the première of "Romance in a Minor Key", Madeleine takes an overdose of sleeping pills in order to protect her husband from the truth. Michael challenges Viktor to a duel and kills the playboy.